We apply the Seagull Rule:

In many cases we will need to split segments into two or more segments to correctly mark only the right parts of the road as a bridge or a tunnel. (This is important for the map’s fidelity and as cues for drivers) 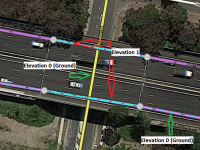