We are currently updating the pages to include all regionally different guidelines. If you find inconsistencies, please refer to the English page. Thank you!
Other languages:
English • ‎Nederlands • ‎français

Use as locking level the same level as the road segment.

These permanently mounted cameras monitor for instantaneous violations of maximum speeds. If a Red Light Camera Installation monitors Speed Limit Violations, there is no need to add a separate Speed Camera.
The Max Speed for a Speed Camera should be set to the speed limit for the road which the speed camera is monitoring. Leave the max speed set to blank if speed is not monitored. Zero is not blank; a max speed of zero will cause the camera to always generate an audible alert. 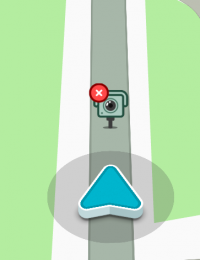