Difference between revisions of "Quebec"

Autoroutes, or limited-access highways, such as the 20, 40, 55 or any *20, *30, *40, etc. are considered freeways. This are drawn in yellow with a red outline on the province's official road map (select Réseau routier).

An exception to this rule is Rte 125 between Aut 440 and the Island of Montreal, which is a freeway in all but name. Aut 50 is also still a freeway, even though some small parts of it are not limited access and some are only two lane with no divider. Aut 20 is not a freeway in Vaudreuil-Dorion because there are traffic lights on it there.

Inside an agglomeration, we use Minor Highway for arterial roads.

Please consult this official map of Quebec to determine the status of non-highway roads.

IMPORTANT: Before classifying roads inside an agglomeration, please contact phil-mtl or Webs101.

We don't use the government official road map to classify roads owned and maintained by a municipality. They often have their own classification, so we use it. The only thing is that it is sometimes hard to get it, so you can try to contact the municipality, or do a research on their website. They often call it ''Hiérarchie du réseau routier''.

Of course, the Montréal area is distinct. You may read more detail on the Montréal Area page. For convenience, some of the information is repeated here.

The English Waze TTS reads French abbreviations such as "Ch" as "chemin" and "Aut" as "autoroute" so we can use them freely. Remember not to use periods, per the Waze guidelines.

The list of abbreviations that we use is identical to the list provided by Canada Post. It is mostly common sense, but Montée (no abbreviation) and Ruelle (Rle) are tricky.

We can freely use "St-" for "Saint" and "Ste-" for "Sainte", but they must have the hyphen. Without a hyphen, they will be pronounced "street" and "suite" (possibly). In practice, we keep spelling those out as of 2019 but there is no real reason not to use the abbreviations.

Quebec has numbered autoroutes and routes. We use the standard Rte abbreviation for routes. The Aut abbreviation does not yet work in Waze TTS, but we use it anyway.

Although some highways may have names, these names are rarely if ever listed on the on-ramp signs so we leave them out. We don't mark Aut 40 as the Trans-Canada. Visitors who don't know that the 40 is the T-Can could get confused, and that's the opposite of what Waze is striving for. So we just call it Aut 40. The alternate street names field works well for adding additional routes etc.

Contrary to Waze practice we do not use "to" or "vers" on highway ramps. The French TTS doesn't handle "to" and the English one doesn't omit "vers". We just deal with it.

We use Est and Ouest because a) that's what the signs mention and b) English Waze clients have no idea what O stands for. Same for Nord and Sud.

The English TTS pronounces translates the cardinal directions into English.

Nearly every compound street name and city name uses a hyphen even if it's the name of a person:

Unless the last name is composed of two words: Av Pierre-De Coubertin or Rue Cavalier-De La Salle. (This is why Dollard-Des Ormeaux is spelled that way.)

It pays to know your history when deciding which French articles and prepositions to capitalize. For a made-up example, look at Rue De/de La/la Roche.

Sometimes, roads named after English places: Rue Duff Court. In general, Quebec will not hyphenate place names but will hyphenate a person's name, although the pattern is not foolproof. Use Street View to figure it out by looking at the street signs.

We do not use Town/Municipality/Village/Ville/City of/de to name municipal entities. There are only two exceptional cases. One is Ville Mont-Royal, which is how everyone refers to it. The other is when two municipalities share a name but differ in kind of municipality, like Hatley and Canton de Hatley.

We do not list the separate boroughs of agglomerated cities with the exception of Montreal because of the city's numerous duplicated street names. Boroughs are identified in brackets like "Montréal (Verdun)". We always use the French form of a city name.

A few separate municipalities in different regions use the same name. In that case, we distinguish them by region like this: Saint-Isidore (Montérégie) and Saint-Isidore (Roussillon).

In all other cases, this document takes precedence over what is currently on the Waze map for this region.

In Quebec, a road sign that indicates that use of a road is reserved for local circulation is enforceable by law, according to the SPVM (Montreal police): "That rule is enforceable and can lead to a ticket being issued as per article 310 of the Highway Safety Code."

The best way to limit routing to local drivers only is to use private roads, which incur a time penalty to discourage routing on them. In practice, this means that a properly formatted private road will only allow routing along it of the destination is on it. For more detail, please read the US Wazeopedia entry for Private Road.

Complex installations and neighbourhoods (such as Kahnawake) with only local circulation are isolated from regular routing by using private roads on every road segment that leads into them. For single roads rather than areas, such as Montreal's rues familiales and actives, we must use little stubs of standard road at every intersection to make sure we force the routing penalty between segments. That way, drivers will only be routed to the segment of private road on which their destination sits. As long as the end points of any segment of private road only attach to non-private and non-parking roads, the penalty will be applied. 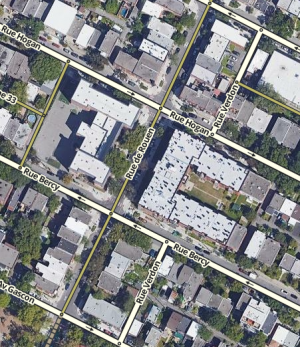 This is bad as the routing may continue on rue de Rouen without penalty. 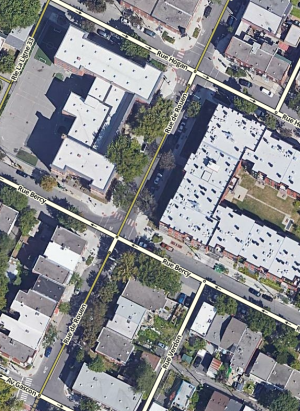 This is good as the segments of private road are all "isolated" by standard streets. 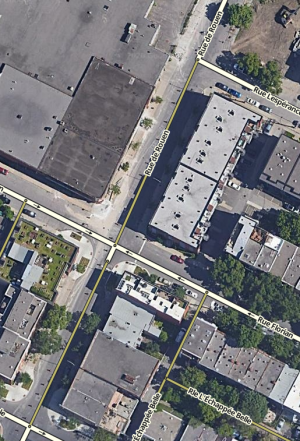 This is also good. Note that the northernmost segment of rue de Rouen does not require a stub.

Stubs should be 6 metres in length. Note that editors who prefer symmetry may choose to put stubs on both sides of an intersection, although that is not strictly necessary.