A “Michigan Left“ is a procedure involving an indirect left turn onto or from a split roadway onto another road where the direct left turn is prohibited at the intersection itself. A Michigan Left can only occur at the intersection with a cross street. Other median u-turns may be available at crossovers along a split road, however these would not be classified as Michigan Lefts since they simply facilitate going the opposite direction along the same split road. Reference figures showing both types of median u-turns together as well as advanced configurations appear in the Median U-Turn Guide below. 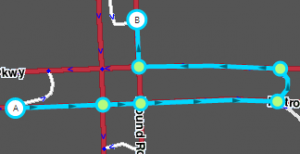 This procedure has proliferated in Michigan since the late 1960's and is locally referred to as a “Michigan Left Turn (MLT)” or just "Michigan Left (ML)", even in locations other than Michigan. The Michigan Left and its variants are now used or being considered in several states and other countries.

In addition, there are a number of related procedures directed toward the same or a similar result as the Michigan Left:

In order to be considered a Michigan Left (or variant), proper signage should be in place prior to or at the median crossover. Depending on what entity maintains the road, however, the quality of signage will vary.

A Michigan Left in Waze typically only requires editing the median u-turn segment according to the follow guidelines: