When traffic moves between two roads that are at the same grade, these connecting segments are not technically ramps to Waze (with some exceptions). Rather, they are considered at-grade connectors (AGCs). When and how to implement an AGC in Waze depends on circumstances.

This article suggests additional clarity to the Waze wiki regarding At-grade connectors, focusing on when they are and are not called for. It is a personal work for local purposes and is not offered nor reviewed as a contribution to the US or Global Waze wiki.

The rule for AGCs is "when in doubt, leave it out." For most intersections, separately mapped turn lanes confer no benefit. They add to the complexity of the display and substantially increase the effort required to verify connectivity, turn restrictions, directionality, name, etc. AGCs can also confuse routing for drivers who request a route while waiting at a stoplight on or near the AGC. If Waze snaps the driver to the AGC, it will offer a route assuming the driver is committed to the turn, which may not be the case.

Editors sometimes add AGCs because the satellite image suggests a separate turn lane when viewed with high magnification. This is never a good enough reason to map an AGC.

The following applications support use of an AGC.

Ideally, AGCs represent physically separate, distinct road corridors that connect two larger roads at the same elevation. The physical corridor must be sufficiently isolated from the roads it connects that typical drivers would expect to see it explicitly depicted on the map, much like a freeway ramp. Update Requests from users that the map should show a connector warrant this application.

Where frontage roads parallel very wide and intersecting highways for an extended distance, AGCs at the intersections may discourage Waze from snapping drivers to the frontage roads. This is uncommon. 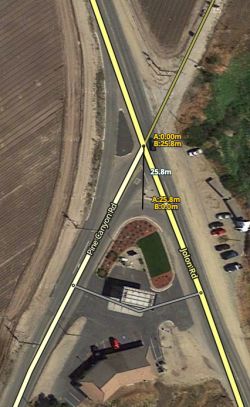 When Waze observes repeated traffic through an area where no road is mapped, it may file a "missing road" Map Problem (MP) at the location. Driver paths that repeatedly "cut the corner" at an intersection can cause this error, but only when the corner-cutting path strays significantly from the intersection junction node. For example, the two short dedicated turn connectors physically present at the intersection of Pine Canyon and Jolon Roads (pictured) come no closer than 30 m to the junction node, but have not caused missing-road MPs. However, a path through the gas station that comes at closest 65 m to the junction node does, necessitating a Parking-Lot Road to prevent MPs (being a corner gas station, it will enjoy improved routing as well).

Waze has not released the distance threshold for triggering a missing-road MP. It appears to have changed over time, and it may change again. As of March 2015[update], even departures on the order of 20 m triggered MPs, resulting in numerous unfounded MPs at large city intersections. This article assumes that 50 m is a more likely long-term threshold.

Uncommonly large bowtie junctions involve a tradeoff. While adding AGCs for the corner paths may prevent missing-road Map Problems, they may also result in an excessively cluttered and confused display. It is thought better in such cases to omit the AGCs and tolerate the occasional missing-road MP.

Note that, even if the separation of the turn path from the center of the intersection does not warrant an AGC, an AGC may still be called for to advance the timing of spoken turn alerts as described below.

By advancing the location of the turn on the Waze map, AGCs advance the timing of turn alerts issued to drivers. In most cases the default alert timing is adequate, but in complex situations, advancing the alert may help prevent missed turns. Such situations can include:

Note that, even if inspection suggests no advance of the turn alert is necessary, an AGC may still be warranted to prevent "missing road" errors as described above.

Assessing the need for advanced alerts at complex intersections

When considering an AGC to advance a turn alert at a complex intersection, concern should focus on the penultimate, not the final, voice instruction. Final turn alerts at complex intersections almost always come too late for drivers who missed the previous alerts, and the editing community generally does not modify the maps to accommodate those situations. However, if the penultimate voice instruction would arrive too late for a driver to reach the correct turn lane, that would warrant an AGC for the purpose of advancing the turn alert.

A simple scoring system using "complexity points" can help assess the need for advanced alerts using AGCs. Measure the distance between the intersection junction node and the "commit location" where a driver must commit to a dedicated turn lane, and, for every full 75 m of distance involved, add one point. Then add another point for every lane change, worst-case, that an approaching driver would have to make to be in the correct through lane to depart for the turn; do not include the dedicated turn lane itself. If the resulting score is three or less, advancing the turn alert is almost certainly unnecessary. If the score is four or more, it may be appropriate to advance the turn warning with an AGC. As a rough rule of thumb, the departure junction of the AGC may be moved up by 75 m for every point over three.

This scoring system is a guideline only. The actual necessity for advancing turn alerts can depend on additional factors such as an uncommonly early commit location (more than 225 m from the intersection), a pattern of heavy but high-speed traffic, poor intersection visibility, other nearby turns that the driver might confuse with the desired turn, and as always, user reports of inadequate alert timing.