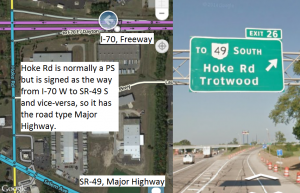 One common reason for a road to be set to a higher type is if that road is a connecting road between two roads with higher types. Promotion of a connecting road is only warranted if the road is signed from one road to the other. For example, a freeway exit may be signed as to a particular highway, but the only way to get to that highway from the exit ramps is over a lesser road. Where such connections are supported by signage, the road type of the connecting road should match the lower of the two roads that it connects. This preserves routing continuity and prevents Waze from pruning out valid routes.

A highway is an arterial road. In the United States, Waze determines which roads are highways according to an objective standard based on FHWA functional classification and designation within numbered state or federal highway systems, regardless of any physical characteristics of the road. This is helpful, because instead of guessing which roads are more important, editors can rely on the analysis done by government engineers.

Waze's definition of "highways" includes all these, but it also includes all other roads that are classified as arterial roads under the FHWA functional classification maintained by the state governments, even though they may not be part of any numbered highway system.

Airport runways and private airstrips may be mapped using the Runway/Taxiway road type. The Runway/Taxiway type is for display only and must never connect to drivable road segments. If a drivable road and a runway cross, set the elevation of the road below that of the runway and ensure there is no connection. Draw each runway as a single segment and lock it to prevent lower-ranking editors from attaching a road. Do not form junctions where runways cross each other.

Name each runway using the word Runway and the runway designations with the lower number first and a hyphen between runway numbers (e.g., "Runway 16R-34L".) For the "City" field of runway segments, check "None" to avoid any chance of city smudging. 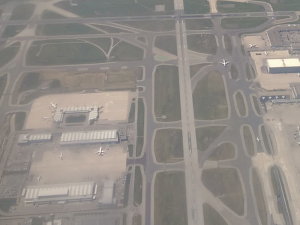 Residents of most urban communities have very short driveways between the named road that they live on and the garage or carport on their property. In general these very short segments should not be mapped, because they have no name, would clutter the map in the client app, take a lot of time to draw, and would greatly increase the overall size of the Waze mapping database with very little return.