A Jughandle is used at a signed/signaled intersection, which disallows either a direct left turn or U-Turn and instead uses a right handed exit to allow access off the main roadway prior to or after the intersection and a subsequent indirect turn from the connector or cross street.

What is a jughandle

There are 3 kinds of Jughandles per the NJ-DOT. They are: 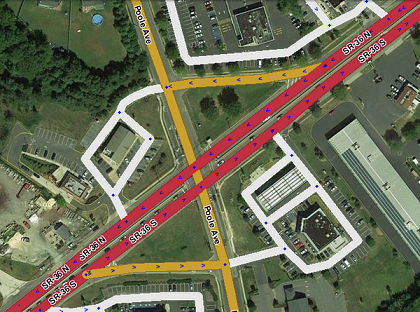 What is not a junghandle

Exit ramps which use local streets to enable this maneuver are NOT considered jughandles.

Any Jughandle which is unsigned with BGS (green signs) or signed with BGS which only display the primary/alternate name of the connecting road, should be treated as a standard At Grade Connector.

NOTE: If the segment connects and routes to 3 or more segments, the type changes to the same as the second highest type which can be routed to or from the jughandle. See Roundabouts for a detailed explanation.

Any Jughandle signed using BGS which has more than one name displayed (ie. multiple streets, community, POI) or not the direct connecting segment name, fall under the exceptions for At Grade Connectors.

The junction angle should be set from 15-30°. This will give the expected instruction for a jughandle of "Keep/Exit right" while giving the transition a clean look on the map.