A Jughandle is used at a signed/signaled intersection, which disallows either a direct left turn or U-Turn and instead uses a right handed exit to allow access off the main roadway prior to or after the intersection and a subsequent indirect turn from the connector or cross street.

What is a jughandle

There are 3 kinds of Jughandles defined by the NJ-DOT. They are: 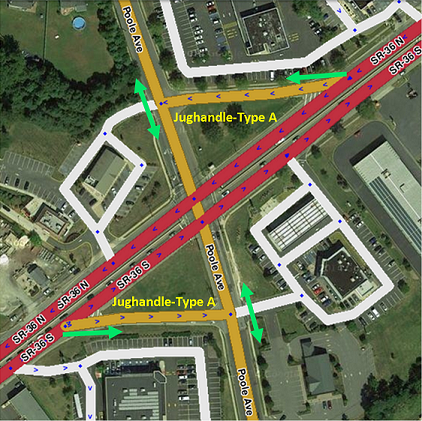 What is not a junghandle

Exit ramps which use local streets to enable this maneuver are NOT considered jughandles.

NOTE: If the segment connects and routes to 3 or more segments, the type rule changes to the same as the second highest type which can be routed to or from the jughandle. See Roundabouts for a detailed explanation of this rule which would apply here.

Most or all of the turns at the actual intersection - from the main road to the cross street - will be illegal. Be sure to check and disable them when applicable. Remember to review the Turn restrictions portion in the Map editing quick-start guide.

The junction should be placed as close as possible to the start of the solid white line and the angle should be set from 10-44°. This will give the expected instruction for a jughandle of "Keep/Exit right" while giving the transition a clean look on the map. For further references that apply to both ramp and At grade connectors revisit the Junction Style Guide and Ramp geometry.