Date and Times are approximate.

If you would like to participate, please fill out this registration form . Registration is open until 22 Mar 2016 00:00:00 UTC.

Please do not make any edits in the raid area until after the raid begins. This will allow us to get good mapraid statistics.

The main goal of this MapRaid is adding speed limits in the Walloon region of Belgium.

If you see basic errors on the map, like bad turns, you can fix them along the way. However, keep focused on the mapraid goal. If you see bigger problems that can be addressed later, contact a raid leader or record it in

Because of the multiple languages used in the BeNeLux, the main language is English. There is help for translations.

When working in the raid area, please set yourself to visible in WME chat. Also, turn on the Live Users layer. This will serve to collaborate smoothly and get quick help at your location if needed.

We will use Slack as the main communication platform. There is a special Slack Channel for this raid. If you are not already part of the Benelux Slack team, you will be invited shortly before the Raid starts.

This MapRaid has only 1 group, working together in the southern part of Belgium. We kindly urge you to stay within the raid area. Use the overlay as it roughly shows the border. The area neighbours France, Germany and the Netherlands. Please do not edit in other countries, even though you might have access. If something needs to be updated, inform one of the hosts who will contact the neighbouring country or use the form mentioned above. 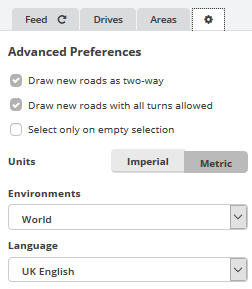 Change to metric for km

Speed Limits in Belgium are expressed in km/h. Always use the metric units setting (see picture) in WME when working with speed limits. There is a handy Speedhelper script that greatly facilitates entering speedlimits.

The speed limits of the roads shall be verified with WME Street View. Unless differently indicated by road signs, the following speed limits shall be used on map: 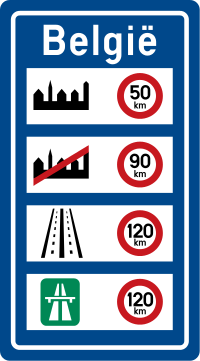 We will follow the guidelines on Speed Limits in the BeNeLux, with the following exception:

If there is no streetview available, or you cannot find signs on streetview, you are allowed to enter the default speed limit by an 'educated guess':

Only use sources that are allowed by Waze.

Editing Quick-Start Guide
How to make a Permalink (watch on YouTube)
WME Reference Sheet[PDF]
a printable double-sided tri-fold quick reference guide to some of the common topics used in WME.

Many tools are essential for good editing, and others make the editing process much easier. Highly recommended for this mapraid are:

Check the option for "No Speed Limit" and Uncheck the other highlight options.
Segments with no speed limit or unverified speed limit will be highlighted orange.

Install for Firefox. Needs Greasemonkey to install and use.

!!KEEP MIND THAT YOU ARE RESPONSIBLE FOR THE USE OF ALL SCRIPTS!!

There is a wiki page and a forum with more information about scripts.

Specific tools for this MapRaid

In the "misc" tab, scroll down to custom markers, choose the last one, and type "kph" in the text box (instead of mph in the picture).
Speed Limit URs are the only ones we should be working with during this mapraid.