From Wazeopedia
Revision as of 21:38, 16 June 2012 by Kentsmith9 (talk | contribs) (→‎Should the connector be mapped?: replaced term "ramp" with "connector" to prevent confusion between the two as this is only talking about connectors.)
(diff) ← Older revision | Latest revision (diff) | Newer revision → (diff) 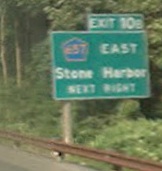