New India Wiki is being built, For now, please see the pages about Waze in India in the old Wiki.

Without roads, no navigation. Drawing the available roads in our map and connect them well is our first concern.

When to add roads

Cities in India have been growing rapidly, with lots of roads being made and connected to existing roads. If you notice any roads on the satellite layer that has not been added to the base map, please try first confirm that they exist before adding them. The GPS layer can be helpfull: you can see if the road has been already driven on by Wazers. 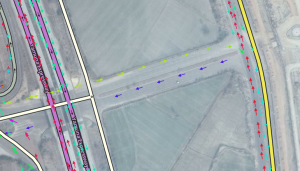 Do not add any roads without either:

If you doubt an existing road is drivable, please don't delete them without prior discussion with the local area manager or one of the champs.
How to add roads is described in the Quick start guide.

Many cities in India are densely populated. Perhaps this is because they used to be villages that have been absorbed into one large city. Villages often have the same layout and structure. Many of the streets in these areas are too narrow to drive through, and shouldn’t be allowed for routing. You can turn off the Roads layer to have a proper view on the Satellite Imagery.

As the pictures show, the primary streets are proper drivable roads. At both sides, the buildings are densely packed and the streets are too narrow to drive through with a car, perhaps some roads are fit for a motor cycle.

If you see streets drawn over these areas, please turn the Roads layer off and verify if the roads are drivable or not based on the Satellite View. For narrow streets where only motor cycles could pass check if the restriction is properly set. If the verifications confirm these streets are not drivable, check the last update. If you see an editor listed there, contact him or her: probably there was a reason to keep the road. If there is no reason, delete them. If you have any doubt, please discuss it with the Area Manager, or contact one of the local champs.

The naming of the roads in India is quite a challenge. Many roads don't have a name or are referred to as the "Road from A to B". And if there are specific names, they are often duplicates, even withing one city. On top of that, there are many different languages/dialects in use.

All primary names should be in English, as one of the official languages in India. It makes Waze usable for almost everyone.

The following convention should be followed where possible, although it is acknowledged that you may need to deviate from it in some circumstance. In case of doubt, please consult with your Community. 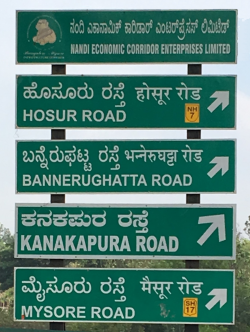 Street name notation: Use AH plus number (without a hyphen), like: AH1, AH42.
Road type: Freeway or Major Highway.

In 2010 a new numbering system for the National Highway network was introduced. The new numbering system is based on the orientation (east-west and north-south) and the geographic location of the highway. Still for many highways the old highway number is used. The National Highways Authority of India (NHAI) is the national government agency that is responsible for the highways.
standard rule is keeping the old NH-number in the primary street name until user reports or pictures (road signs) give evidence that the new number is being used. The new number can be added as alternative street name. If the new highway name is really used the new NH-number should be used as primary street name and the old NH-number goes to the alternative name.

The individual states are responsible for their state highways.