From Wazeopedia
This page is a translated version of the page Waze Closures Bot and the translation is 67% complete.
Outdated translations are marked like this. 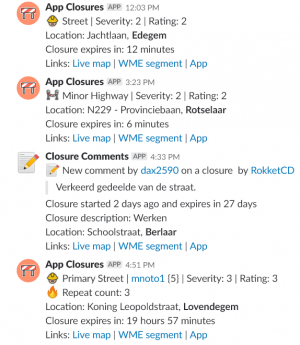 The Waze Closures Bot publishes closure data, reported via the app in the Slack BeNeLux Closure channels. Editors can easily use this data for modifying and implementing closures. The bot is developed by WimVandierendonck.


Only reported closures with ranking 5+ are displayed on the Live map.