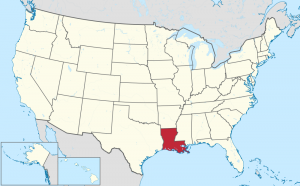 This page serves as the primary resource for editors of Louisiana. Review all the sections to better understand how the guidelines for this state might deviate from the overall USA or worldwide guidelines. If you have any comments or questions about this page or state refer to the community links below.

Louisiana is a part of the South Central region, which includes the states and/or territories of:

Before editing the maps in Louisiana, be sure to fully review and understand the editing manual.

Louisiana currently uses the Statewide Highway Functional Classification Maps (2013) for the determination of road types in the state. Use these maps along with the Road types guidance to determine the appropriate road type for roads in Louisiana.

The Waze forum is a great place to find answers to previously asked questions and also a place to ask new ones. Below are links to the forums specific to Louisiana.

Area Managers for Louisiana can be found in the table below.


Some states and territories manage a separate page on cities and towns to identify the specific city names that should be entered, and no others. For states that do not have a separate page to track the names, see this Wikipedia link and find the state or territory in question.

Louisiana follows the general road naming and road type guidelines of the USA.

In Louisiana we have a set minimum standard for locking roads based on segment type. Any road of a certain segment type must be locked at least to the rank (level) in the chart below. Roads may be locked higher for protection and special situations (areas with construction, tricky design, frequent mistakes, imaging inaccuracies, and the like), but should not be locked lower.

Louisiana follows the standard USA guidelines for all of the following special road types.

Dedicated median U turn segments in the New Orleans metropolitan area (at least) shall be unnamed.

A turn instruction override should be used such that a "U turn" instruction is given when entering the U turn segment.

For curved segments, the geometry of the segment should be set such that no instruction is given when leaving the U turn onto the road. For straight segments, a turn instruction override may be used as well, set to "None".


The Federal Highway Administration keeps a website indexing all states that can provide highway and construction project information. Go to the page, find your state, and check the links for the desired information.

Louisiana follows the USA standard for Places. Do not deviate from the guidelines without first obtaining consensus to do so via the state forum linked on this page.

Louisiana generally follows the Places guidance of the South Central Region, with limited exceptions, which are noted in the region page. Notably, Louisiana uses Area (rather than Point) Places for libraries and new car dealerships.

Laws regarding speed and red light cameras vary between the states and territories, so be sure to understand the details of camera legality in Louisiana.

Based on information researched at the time this page was created, the limited legality of red light and speed cameras in Louisiana is described below.


This state does not currently have an active "to do" list at this time. Check in the Louisiana section of the Waze forums to discuss creating one.

The table below identifies the editors also designated as Area Managers or higher who are editing in Louisiana. If you have any questions, please consider contacting them directly as needed. If you are an Area Manager that covers Louisiana, or a USA Country Manager that does a lot of work in Louisiana, please add yourself to this list (alphabetical by username) in the correct rank section.

The editor who also serves as the Regional Coordinator for Louisiana is automatically listed at the top of the table. That editor may not be highly active in this state and therefore may not be listed separately in the table.