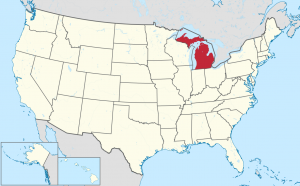 This page serves as the primary resource for editors of Michigan. Review all the sections to better understand how the guidelines for this state might deviate from the overall USA or worldwide guidelines. If you have any comments or questions about this page or state refer to the community links below.

Michigan is a part of the Great Lakes region, which includes the states and/or territories of:

Before editing the maps in Michigan, be sure to fully review and understand the editing manual.

The Waze forum is a great place to find answers to previously asked questions and also a place to ask new ones. Below are links to the forums specific to Michigan.

Area Managers for Michigan can be found in the table below.

Michigan follows the general road naming and road type guidelines of the USA.

The following proposal for a new national state highway naming standard is currently under review by the GLR State Managers.

When to include a City Name on a State Numbered Highway:

Michigan follows the Waze Functional Classification (FC) standard for determining what Road Type to use for all paved roads.

The following defines a set of minimum locking standards proposed for all roads within Michigan. Any road of a certain type or category must be locked at least to the level in the chart below. Roads may be locked higher for protection and special situations (tricky design, frequent mistakes, imaging inaccuracies, and the like), but should not be locked lower.

Michigan follows the standard USA guidelines for all of the following special road types.

Guidelines that vary by state or territory

In Michigan the following are managed differently than USA Guidelines:

All dirt roads should have the unpaved checkbox marked.

This supports expectations of users who have disallowed dirt roads in their Waze routing preferences.

Oakland County published the following sections regarding Absolute and Prima Facie speed limits. Even though Oakland County posted it, it applies to the entire state.

In 2006, the Michigan legislature changed the restrictions for prima facie speed limits, limiting the locations that qualify for posting at 25 miles per hour. The revised law now requires the following speed limits: 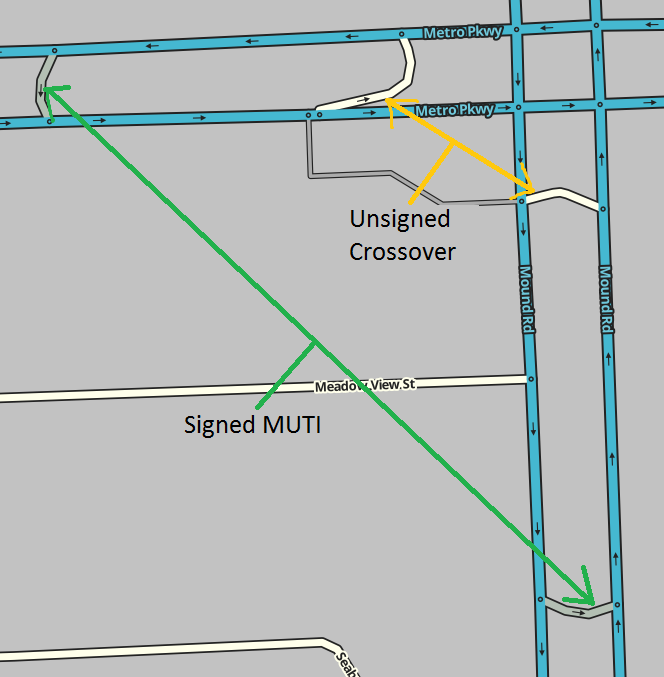 The following proposal for a new national standard setting a minimum length for dead-end parking lot roads is currently under review by the GLR State Managers.

Dead end parking lot roads should be at least 100ft (30m) in length. This standard could be integrated nationally into either Best_map_editing_practice#Parking_Lots or Road types#Parking_Lot_Road.

The following are resources run by the Michigan DOT:

Michigan follows the USA standard for Places. Do not deviate from the guidelines without first obtaining consensus to do so via the state forum linked on this page.

Michigan has a standard when working with our Places. In order to ensure consistency and data integrity we enforce the following standard (considered "completing" a place):

Fast food chains or businesses that can sometimes be nested inside other businesses should be labeled as such. For example, if a Starbucks is inside Target or a Subway is inside Walmart, you would list it as Starbucks (inside Target) or Subway (inside Walmart) as the primary business name. This will allow for Wazers searching for a Starbucks or Subway to immediately know they may be routing to a coffee shop or sandwich shop with no drive-thru or standalone business as they may want or expect.

Do not create a non-public PLA with no name. They cannot be seen by users unless the name of the parking lot is specifically searched for. Due to the lack of user education on the parking feature and nature of the feature preventing proper categorization of parking lot types for lots associated with businesses, we do not map them.

Laws regarding speed and red light cameras vary between the states and territories, so be sure to understand the details of camera legality in Michigan.

Speed and red light cameras remain illegal in Michigan. State House bills 4762 and 4763 failed to pass the house in the summer of 2013.

While traffic monitoring devices are employed in the state, no cameras are used for enforcement or issuing citations according to the Michigan State Police.

Never add or approve a Speed Camera or Red Light Camera in Michigan. All attempts to add them to the Waze map should be immediately deleted.

For spreadsheets above, comments can be inserted, but edits are locked. Send a PM to SkiDooGuy for editing access.

The table below identifies the editors also designated as Area Managers or higher who are editing in Michigan. If you have any questions, please consider contacting them directly as needed. If you are an Area Manager that covers Michigan, or a USA Country Manager that does a lot of work in Michigan, please add yourself to this list (alphabetical by username) in the correct rank section.

The editor who also serves as the Regional Coordinator for Michigan is automatically listed at the top of the table. That editor may not be highly active in this state and therefore may not be listed separately in the table.