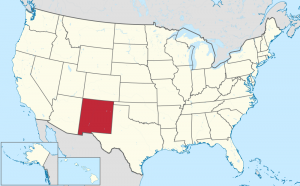 This page serves as the primary resource for editors of New Mexico. Review all the sections to better understand how the guidelines for this state might deviate from the overall USA or worldwide guidelines. If you have any comments or questions about this page or state refer to the community links below.

New Mexico is the "Land of Enchantment," one of the largest states in the United States. It is fairly rural and sparsely populated state that includes a number of Native American Indian reservations, and the largest military base in the USA, White Sands Missile Range. It has vast areas of deserts mesas, and volcanic flows. It has many mountainous regions from the southern-most parts of the Rocky Mountain chain. Major freeways running through the state are I-40 and I-25 that intersect at its largest city, Albuquerque, and I-10 that runs along the southern area of the state.

Vast areas of the state are part of independent Native American Nations, the Bureau of Land Management, the US Forest Service, the Park the Service, and Military Private Installations. These areas have their own separate road networks. See specific wiki guidance about these areas.

New Mexico is a part of the Southwest region, which includes the states and/or territories of: 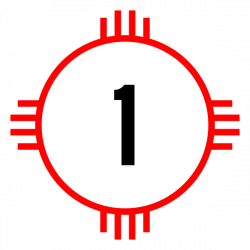 New Mexico is bounded by these states in the USA:

Before editing the maps in New Mexico, be sure to fully review and understand the editing manual.

nmcounties.org The 33 Counties of New Mexico

The Waze forum is a great place to find answers to previously asked questions and also a place to ask new ones. Below are links to the forums specific to New Mexico.

Area Managers for New Mexico can be found in the table below.

These are the known cities with duplicate city names in New Mexico:

Interstates in New Mexico are the following:

The approved format for State Highway naming in New Mexico is: SR-##. The SR prefix is pronounced by TTS as "State Route".

The former US-66, now known in many parts of the state as "Historic Rte 66", "Old US-66" or similar derivatives, is no longer a commissioned US highway in New Mexico. The US route shield is not used.

Actual locks used may be more or less than values in the table, depending on area circumstance. Please consult the RC, SM, or appropriate AM for guidance.

The New Mexico Classification and Color scheme comes from the official New Mexico D.O.T (NMDOT) Functional Classification (FC) map that is published by NMDOT. The legend shows what classifications NMDOT uses and what color is assigned to each class. The actual interactive State Map can be found here:

New Mexico follows the standard USA guidelines for all of the following special road types.

This is interim guidance for New Mexico, until such time as National standards are agreed upon.

U-turns should be permitted when both of these conditions exist:

See New Mexico DOT for a list of road closures & changes to traffic flow that impact the Waze map. Only long-term construction projects should be addressed.

New Mexico follows the USA standard for Places. Do not deviate from the guidelines without first obtaining consensus to do so via the state forum linked on this page.

Places are landmarks that can be added to the map via the editor (WME) or via the application on user devices. Global guidance and detail on Places is located here. Additional information and guidance for New Mexico is as follows:

Point Places are not shown on the client display. Recent conversations with Waze staff have indicated these will not likely be displayed on the client any time soon. Point Places have a single location, a point.

Area Places are shown on the client display when they are of sufficient size. Very small Area Places are not displayed. Area Places have a polygon shape and an adjustable destination point. The name is displayed on the client map in the middle of a shaded area. There are many categories to pick from such as gas station, park, school, etc.

Places can be added via the client application, and are actually encouraged by the Waze app. These may wait approval or automatically be approved via relatively complex rules.

All Places that have complete information (to include, at a minimum, address/city, hours of operation, phone number) are to be locked at Level 3. This is to prevent loss of data due to automatic acceptance of Place Update submissions from Trusted Users, or Place Update Request approvals from other editors without careful examination.

If you do not have a high enough enough rank to lock the place as indicated, please lock it as high as you can, and notify a higher rank AM, SM, CM, or Champ to lock it higher.

When to use Area Places

Area Places should are encouraged to add content to the Waze client map because (a) they add interesting and valuable content that provides context for navigation for Wazers, and (b) because Wazers can scroll to a point on the map, touch where they want to go, and tell Waze to take them there. Without Area Places neither of these things are possible. Area Places also come up in Point of Interest (POI) searches.

Those items that are "landmarks" for travelers should be put on the map. This may include historic locations, larger and more frequently traveled to shopping areas, stores, etc., and locally important navigational points that would be relevant when guidance is given such as "if you reach the drugs store, you've gone too far" or "turn left at the Eat At Joes restaurant."

Notice that Area Places may have locally important context that should override national guidance.

When to use Point Places

Use point places when the item you're noting should not display on the client display but show up in POI searches. Point Places are useful for marking specific locations in a larger Area Places, such as where to park and other special locations. For instance, Point Places are useful for noting the location of individual stores in a shopping plaza when an Area Place marks the whole or a large part of the shopping plaza.

When naming Schools, do not use "School" in the name and do not abbreviate the name.

Use High, Elementary, Academy, Charter, etc... the only exception is Middle School. A consensus of editors has decided that Middle Schools will keep School in the name. Leaving it out (Thomas Jefferson Middle??) would just look wrong

Laws regarding speed and red light cameras vary between the states and territories, so be sure to understand the details of camera legality in New Mexico.

Speed cameras are legal in the State and are in use in the City of Albuquerque.

Looking for something to edit in New Mexico?

You can find some information on New Mexico's To-Do List; however, that list is not always maintained. Check it and see. We try to list current projects as well as to-do items. If you have interest, you can add your own to-do items there. You are more likely to find additional information in the New Mexico Forum page.

In general, you will find most highways are well maintained. A lot of work needs to be done in small rural areas and towns. In larger cities we often need help on User Reports and Place approvals.

It's always a good practice to introduce yourself and post your intended actions in the New Mexico Forum page in case others are working there or want to interact with you about your efforts.

We need balance in protecting the integrity of roadways and other content that has been put into the map and providing access to as many lower-level editors as possible. This guidance really needs to be locally driven because one answer does not fit all situations. General guidance for locking roads to editing ranks for New Mexico is as follows. Lower-level editors can always ask for unlocks from other state or national editors.

When lower lock levels are possible:

User Reports (URs) are problem reports that Wazers typically enter from the client when they notice a problem on the map or in Waze routing. These reports come with a category, potential reporter GPS track, potential Waze navigation route, and sometimes with a text message from the reporter. The UR system allows for text dialogue between map editors and the reporter. Editors may leave URs open or close them as resolved or unresolved.

We suggest editors in New Mexico consider an etiquette process for communicating and closing out URs.

No fixed approach will be appropriate because of the large number of situations associated with URs. Here is a general approach:

Following are suggested templates for your response. Use these, modify, or create your own. You may want to personalize your response.

The table below identifies the editors also designated as Area Managers or higher who are editing in New Mexico. If you have any questions, please consider contacting them directly as needed. If you are an Area Manager that covers New Mexico, or a USA Country Manager that does a lot of work in New Mexico, please add yourself to this list (alphabetical by username) in the correct rank section.

The editor who also serves as the Regional Coordinator for New Mexico is automatically listed at the top of the table. That editor may not be highly active in this state and therefore may not be listed separately in the table.