Natural features can be mapped to enhance the visual appearance of the app and to help give the driver visual clues of their location. Natural Feature is the parent category and the subcategories are: Canal, Dam, Farm, Forest / Grove, Island, River / Stream, Sea / Lake / Pond, and Swamp / Marsh 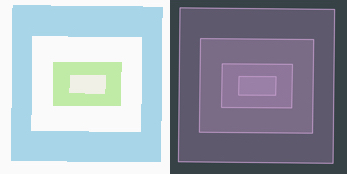 When a smaller area place is entirely within the bounds of a larger area place the smaller place will appear as the top layer in the app.

Dam area places are shaded blue in the app so it may be necessary to use a different primary category that will shade the dam area place dark grey.

The Hoover Dam example shows a dam that is mapped with the primary category set to Tourist Attraction / Historic Site. The dam is shaded dark gray which visually differentiates it from Lake Mead and the Colorado River. The Oroville Dam example has the primary category set to Dam. The dam is shaded blue and it appears to be a body of water in the app although the actual dam is an earthen dam. This results in the dam not being visually different than Lake Oroville. Farm should be mapped as a point place.

Use area place to map any forested area.

Use area place to map any island or land where the land:

Use area place to map the appropriate water feature where: