Unpaved roads – including gravel, macadam, and dirt roads – are considered on a regional basis. Check your state page or contact your regional coordinator. 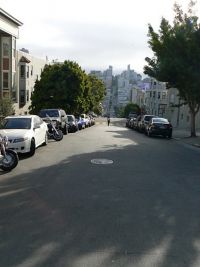 The following roads are to be classified, at minimum, as  Street :

existing text to be replaced Any road for public travel which does not meet the criteria for any other type shall be classified as a  Street . Shown as "local roads" in some functional classification maps; not shown at all in others.

new text replacing the above

As of October 31, 2018 (2018-10-31)[update], the new road type  Passageway  should not be used in the USA. This road type is designed for other parts of the world, where some public roads accommodate > acommodate =spelled wrong only vehicles narrower than cars. At this time, DO NOT use the  Passageway  road type in the USA without explicit champ approval for each instance.

For guidance on mapping service roads AKA frontage roads, see the service road page and the section above.