Similar to a MUTI, a Restricted Crossing U-Turn (RCUT) intersection involves indirect left turns at an intersection with an opposing road. Unlike the MUTI, however, the roads do not cross. RCUTs usually involve a major split road intersecting a minor road, and direct turn lanes exist at the median to turn left onto the minor road. As a result, “thru” traffic on the minor road must complete a right turn, median u-turn, and then another right turn to continue on the original roadway. Alternative names for RCUT include Superstreet and J-turn. Due to the dedicated left turn for the major split road, signage may not exist to aid the minor road with the median u-turn. Even without signage though, the following treatments should still be applied.

Conventions for the two outer median u-turns are the same as MUTI:

Sample RCUT as it appears in Waze Map Editor:

The interior direct left turns from the major split road onto the opposing roadway should be mapped as distinct turn lanes but treated as standard at-grade connectors. These turn lanes should not be ramp segments. Usually, only the continuation onto the minor road is allowed, but this may vary at each intersection. Care should be taken to determine whether a median u-turn would also be allowed, and turn restrictions should be set appropriately. 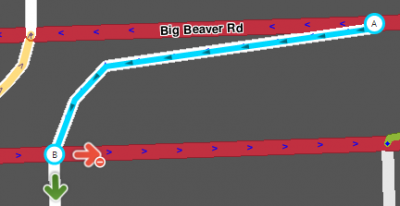