Live issues appear on the Client application map as they are reported by other Wazers, or as they are detected by the Waze servers monitoring the traffic flow through other Wazer client devices. Some reports only appear on the Editing map where Wazers like yourself will make changes to the map that appear later after a scheduled map update.

From the Client application on the Waze Main Map, tap the bottom right Report (

) button to bring up the report manu and select the desired report button. 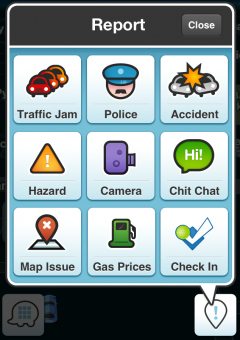 Once you press the report button from the main map, the current location and time are stored and will be included when you finally save the report. If the Waze server is not currently in communication with your client device, you cannot create the report.

Because of technical limitations and privacy, live reports will generally be delayed about 30 to 120 seconds before they appear on the client map. Other reports that are not live will appear on the map after a map editor (Wazers like youself) takes your information and adds it to the map.

Live reports will appear on the client map about 60 minutes from when they are reported, or until another Wazer clicks 'Not There' when prompted by the Waze server during an alert to the user. The countdown timer will reset for some additional period of time beyond the initial 60 minutes when another Wazer clicks the 'Thumbs Up' button on an alert.

On every live report, you can optionally add details about the incident or indicate it as headed the opposite direction.

Clicking the Later button will save the report time and location so if you do not want to be distracted by creating a report at that moment, you can submit it when you have stopped along your route or reached your final destination. If you do not hit any button within 10 seconds after selecting the report type, your report will automatically be saved for later. It will appear as a floating tab at the middle-left of the client map. Press the tab to reopen it.

Only one report can be saved or entered at any time. If you save a report for later and need to report something else, the second report will remove the first one.

Live report types are those which will immediately appear on the client map after you save the report.

Reporting a traffic jam happens automatically when you're in slow traffic, but you can manually report traffic issues as well. When you slow down in an area that the Waze server has not previously seen slow traffic, it will ask you if you are in stopped traffic. If you simply pulled over to the side of the road out of the lanes of traffic, say no to the request. Otherwise you can report the issue to help other Wazers coming behind you.

From here, you can choose the traffic type:

Reporting Police can only happen manually. You can report Police that are setting up speed traps, watching red light runners, and HOV lane violations. It is best not to report police driving or moving because the report will only be indicated for the location you saw them and the next Wazer who gets the alert will not see them there and indicate 'Not There' and remove the alert. 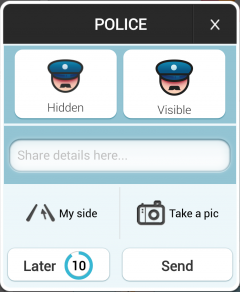 Choosing between hidden and visible can help other Wazers spot the police car. If you select neither, the report will just show as 'Police.'

Reporting accidents enables other users to navigate around the area with alternate routes. Its useful to take a picture of the accident as you move around it to give other Wazers a visual indication of how big is the incident. Accidents can vary, but generally any incident involving one vehicle hitting another (regardless of how small) should be reported as an accident and not an object on the side of the road. 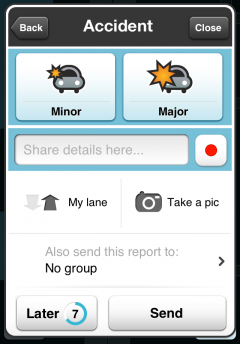 Here you can choose between two accident types. If you select neither one, it is simply listed as an Accident in the alert.

Hazards are issues with the road that affect driving, but aren't necessarily a major issue. This can be weather related, or objects in the road. 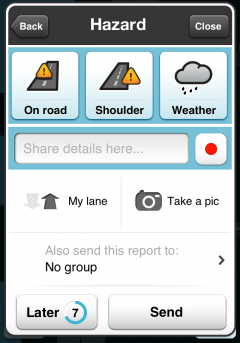 You can select from 3 types of hazards which then shows a list of sub-types from there. If you select none of the hazard buttons, you can describe any hazard in the details box and send it as a general hazard. 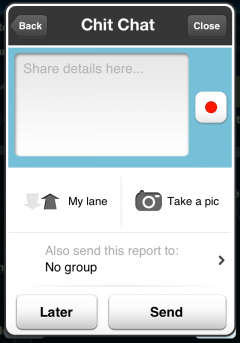 The other types of reports available in the Waze client application do not directly show up on the client map, but in some cases are sent to the Editing map being edited by other Wazers like yourself. Once the information is added to the Editing map, it will appear in the Client map after a scheduled map update.

The Client map will display speed and traffic light cameras for Wazers to be aware of them. If you find an area of the map that does not yet indicate one of these cameras, you can report it with this report option. Note that the speed cameras will only send an alert to drivers that exceed the speed indicated by the camera and if the option to display speed cameras is enabled in the client settings. 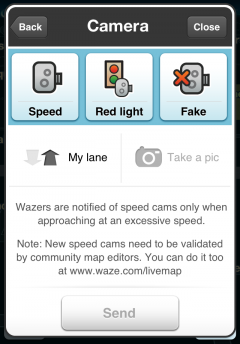 There are three different camera types that can be reported. Once you send your report, a note is added to the Editing map to be reviewed and added to the map by the editors. After they are added you will see them in the client map (usually a week or so).

The Waze system depends upon the users to help maintain the most up-to-date information on the client map. It is through the Map issue reports that any changes in the roadway can get reported to map editors (Wazers like youself) so they can be added to the map. Note that map updates are not immediate and may take days or weeks to appear on the client map. You can always check the Waze Status page for any current information on the map update status.

The initial Map issue screen shows a list of map issues that can be selected with a place to describe the problem with more detail as necessary. The list is longer than the screen, so you can scroll down to see more from this screen. 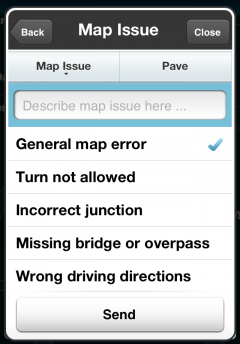 The categories of map issues are:

Note that if you are using the Waze navigation at the time you report a map issue, your report will include about 1/2 mile or 0.3 km of your route and the path of your vehicle for the map editor to view. If you are reporting a routing related issue, be sure to mark it inside the distance noted. Marking a report 10 miles before a wrongly indicated turn will only show the route at that point and would then require you to describe the problem in detail in the description field.

If a road is missing, you can optionally select the Pave tab at the top of the screen. 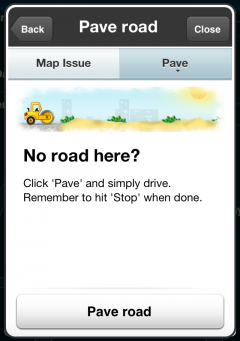 This permits you to drive along an unmapped road that will appear in the Editing map for the map editors (Wazers like yourself) to convert your recorded route into actual roads that will appear back in the client map after the next scheduled update. To pave a road, drive to the start of the missing road and press the Pave Road button to start paving. The screen will show a paving roller vehicle on a tab in the middle-left side of the map. After you complete your drive on all of the missing road(s), press the tab to complete the paving process and save your changes.

Waze keeps track of gas and petrol prices through user updates. When at a gas or petrol station select this report option to enter the current prices for that station. 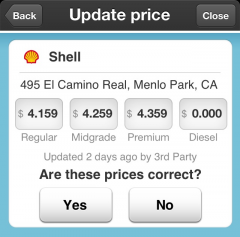 If what is displayed is correct, press Yes. If they are different, press No and enter the correct information.

Waze has partnered with Foursquare to provide a direct link to their application for sharing information about places to go, things to see, restaurants to visit, etc. When you select the Foursquare report option, you will see a list of locations near you. Simply select the one you are visiting and that is all.

Waze uses a point system to reward users who contribute to the overall Waze application, when reporting most issues. Chit chats and pings do not accumulate points. See the points article for more information.