To keep city names from sprawling over too wide an area in the Waze app, in WME and in LiveMap, editors follow standards of placing the city name on segment details only within the boundaries of the city polygon. That means many addresses on the map are in “no city” areas, particularly in rural regions. Additionally, sometimes large cities have well-known areas, which are defined by USPS addressing, but the area is technically still a part of the larger city. <-- The last sentence needs work, but I'm getting too scattered to nail it, right now.

An editor can create a Residential Point Place (RPP) in the correct location with an accurate address, but Waze may not route to the RPP if the city name is not matched on a nearby road segment. It will display under the "more results" tab in the app, but will be listed without a city and is thus unlikely to be chosen.

??Waze app search defaults to a best match of search terms, whether they're entered in search fully or selected from the autofill results.?? If the Wazer enters or selects a postal address and there is no matching city on the Waze segment, Waze will fall back to Google data that matches and will route to that pin. That’s not always optimal, especially in rural areas or other locations where the destination is some distance from the named road. 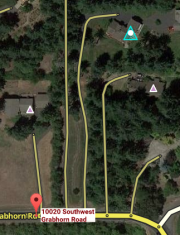 Because many Wazers will search for a location by its postal address, a new (as of November 2016) editing standard includes adding the USPS-designated city as an alternate on segments having no name, or a conflicting name, in the City field.

For example, these images show the search result discrepancy between the Waze RPP and the Google destination pin. The example shown in the images is 10020 SW Grabhorn Rd, Beaverton, OR. 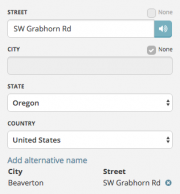 The USPS city, Beaverton, has now been added in an Alt name for SW Grabhorn Road. The RPP city now matches the Alt name city on the road, so the RPP is used, instead of the Google pin, providing proper routing to the destination.

The improved navigation result can be seen in the final screenshot from the app.

When a postal address is searched within a large city, the search result may again default to Google information, because the primary name used on Waze segments is necessarily the city name, in order to preserve the City polygon. In these cases, an Alt name using the postal city should be added in order to allow proper routing using the USPS city name.

There are sometimes multiple city names in use for an area — a municipality or a Census Designated Place (CDP), in addition to the postal address. Typically, only the USPS naming should be added, and CDP names should not be used, unless they happen to coincide with USPS naming.

Editors should use official USPS tools to check the city. If you know the ZIP Code, the city can be looked up here, or you can verify the USPS city for an address:

Every Door Direct Mail, a mapping tool from USPS, produces a map with ZIP Code boundaries:

Not sure how this is pertinent.... TIGERWeb is an online service of the U.S. Census Bureau:

Note that ZIP codes should not be used in any segment naming, as they sometimes do not match city naming boundaries.