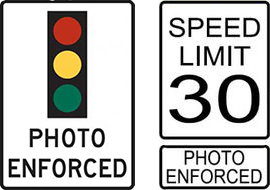 Waze supports numerous types of enforcement cameras and can provide client alerts when approaching a validated camera installation. Also review the article on tips and hints for speed cameras.

Also known as "What is NOT a Red Light Camera".

Before adding any cameras to the Waze map, you must be sure you are accurately reporting a true Waze tracked camera installation. Many devices may have similar appearances but very different functions.

The following devices all serve different purposes, but may all be installed at the same intersection.

Traffic signal preemption is a type of system that allows the normal operation of traffic lights to be preempted, often to assist emergency vehicles. A very common system in the United States is the Opticom™ system by Global Traffic Technologies (GTT).

These devices have a few things in common:

Traffic cameras monitor the flow of traffic or the depth of a queue waiting for a signal. They allow for automated optimization of traffic signal timing, real time monitoring by police and highway departments, and public feeds to news outlets and the Internet.

These "cameras" may be video cameras, Radar transceivers, or a combination of the two. If Radar is used, it may trigger drivers' Radar Detectors. They may assume they are being monitored for speeding or other traffic violations although, that is not the case unless additional camera equipment is also installed. Also note that some pedestrian cross walk equipment may also use Radar and might set off Radar Detectors.

Traffic cameras have a few main things in common:

It is also common for a Red Light Camera installation to monitor for speed limit violations.

Red light cameras have a few main things in common:

Speed Cameras are devices which monitor traffic for vehicles exceeding a set maximum instantaneous speed or for exceeding a maximum average speed over a fixed distance. Detection may be facilitated with Radar or wire loops embedded in the road surface.

They can be permanently installed or mounted temporarily. Temporary deployments include mounted on trailers, hidden within vehicles, mounted to marked police vehicles, and handheld units. 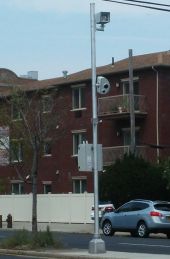 These permanently mounted cameras monitor for instantaneous violations of maximum speeds. Systems that monitor average speed over a set distance (such as SPECS) are NOT supported at this time.

If a Red Light Camera Installation monitors Speed Limit Violations, there is no need to add a separate Speed Camera. The speed limit can be applied directly to the Red Light Camera. See the section on Camera Speed for details.

Please make sure you only report true Red Light Camera installations and do not confuse other device types. See Know your Cameras above.

If a Red Light Camera installation monitors for Speed Limit Violations as well, be sure the speed limit is set as described in the Camera Speed section.

Some locations may have authorities install poles and enclosures for traffic enforcement camera which do not contain functional devices.

Also be sure to place the correct quantity of cameras: The ability to report Cameras in the App is no longer supported. They must be entered from the Map Editor (see below).

From The Map Editor

Cameras of all types must be added to the map from the Map Editor. Cameras are added by selecting camera from the draw segments menu.

If a reported camera is not in quite the right location, it can be moved within the Map Editor.

When you click on the camera icon, a circle appears; the camera can be moved anywhere within that circle. (After saving, you will be able to move the camera again within a re-centered circle.) Take care to ensure the red dot is facing in the proper direction after moving a camera.

The Max Speed for a camera should be set to the speed limit for the road which the speed camera is monitoring.

The Max Speed can also be set for a Red Light Camera if it monitors for speed limit violations as well as red light violation. Leave the max speed set to blank if speed is not monitored. Zero is not blank; a max speed of zero will cause the camera to always generate an audible alert as discussed below.

While a Red Light Camera will always give an alert in the client as a driver approaches, a Speed Camera will always show a pop-up alert, but will only generate an audible alert if the driver is exceeding the set speed limit as the vehicle crosses an invisible threshold one-half (1/2) mile from the camera's placement. A situation can arise where a camera placed precisely one half mile from an intersection requiring vehicle to slow or stop will not be announced, because the vehicle is traveling at less than the speed limit. In cases like this, editors should consider setting the max speed speed to 0 to alert all drivers approaching the camera, no matter their speed.

A camera can be locked in the same manner as other map elements like segments or places. An editor must have a rank equal-to or greater-than the current lock level to edit or remove a locked camera. In the USA, cameras should be locked to the same level as the nearest segment. For example:

No additional verification or approval is required when a camera is added via the WME. Camera updates will not be seen until the tile is updated. To expedite the process, perform a Trigger Update on the same tile.

Cameras can be removed in the same manner as other map elements in the Editor -- select the camera and press the trash can icon in the menu bar. An editor must have a rank equal-to or greater-than the lock level to remove a locked camera. Once deleted, the map tiles must be updated for this change to propagate out to the users. However, the deletion itself will not trigger the tile update, so make sure that some other edit to the nearby roads is made so that the tile will be sure to update.

Be sure you have confirmed the camera is not present and if there are multiple cameras in the area, be sure you are deleting the correct one.

The legality of cameras is different in each state. Review the specific regulations in your state through the link below.