Waze searches for the fastest route to the destination, but sometimes, a promising route takes detours from the most obvious, most direct, or otherwise most continuous route. These detours may involve taking side streets, making a few extra turns, or taking an exit off a highway and then re-entering the same highway a short distance later. Unless the detours actually save a notable amount of time (or distance), they aren't worth it to drivers, and Waze shouldn't suggest them. Here are two cases where Waze recognizes a detour in the route and applies a penalty to prevent that detour unless it saves enough time (or distance) to be "worth it."

Direct Route
The continuous route most users would expect. For example, a route that stays on the same freeway from point A to point B
Detour
Any route used in place of the direct route.
Alternate Route
What Waze compares a route to - when evaluating a detour route, the direct route is the evaluated alternative.
Road Type Continuity
A set of continuous segments which all have the same road type have Road Type Continuity. If the road type changes, there is a road type discontinuity.
Name Continuity
A set of continuous segments which all share a name have name continuity. It doesn't matter whether the name is found as a primary or alternate name on any of the segments, as long as it is present in each. If one of the segments in this continuous set does not share the name shared by all the other segments, then there is a name discontinuity.

Waze makes a few checks on an off-highway detour to see if it should be prevented. It checks the length of the detour, makes sure the road type changes, and that the name is not continuous with the highway the route detours from. It also checks that there exists an alternate route that is direct - the direct route must have both continuous road type and name continuity (see details below). Waze does not consider how many 'turn...', 'keep...', or 'exit...' instructions are issued on any of the paths it checks for detour prevention.

If a detour being examined passes the checks listed below, we'll call it a preventable detour. If a route leaves a highway (based on road type) to one or more segments whose road type is not in the same road type group as the highway, only to re-enter that same highway, Waze will look for alternate routes to that re-entered highway segment and try to find a direct route. If a direct route is found, then Waze will apply the big detour prevention (BDP) penalty to the preventable detour favoring the direct route. Here are the specific checks that Waze makes: 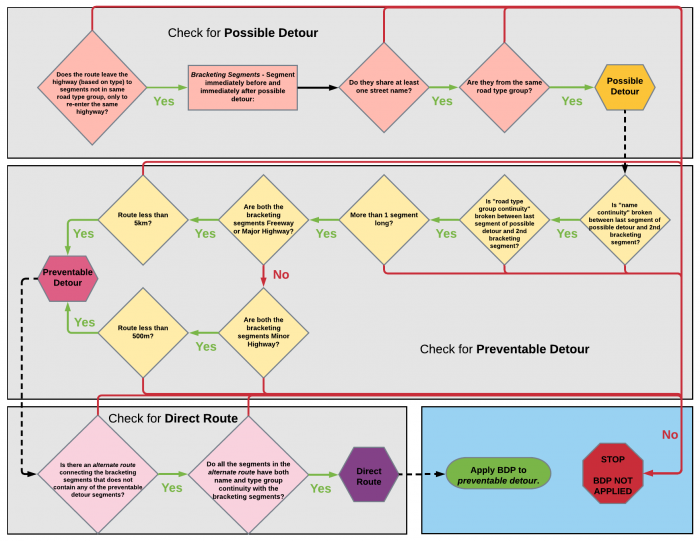 Waze has a small detour prevention mechanism to deal with instances where Waze calculates that that a left turn can be "optimized" by using U-turns and right turns (either continue straight, U-turn, right turn; or alternatively, immediate right turn, U-turn, continue straight). While this may save a few seconds over waiting for a long average left turn, it is undesirable. Waze will prevent such detours if there is not a notable difference in the route times. The actual difference in time required to trigger this prevention is a closely-guarded secret, but if you come across one of these where you feel Waze didn't adequately prevent it, please contact your community leadership for advice. There may still be a solution, but it may have to be evaluated on a case-by-case basis.