The United States military machine uses bases to house and train our Airmen, Marines, Sailors, and Soldiers to send them to the front lines of battle or disaster. The military has bases throughout the country in different terrain to help keep the troops trained for various types of terrain throughout the world. Someone stationed in Florida may find themselves in the desert of California for desert warfare, while someone from California may be sent to Alaska to train in the arctic cold. Each base is unique in what it is used for.

All roads within the confines of the gate for a military base should have the official name of the base as the city name. Examples: NS Mayport, NAS Jacksonville, or NSB Kings Bay. City names should change at the gate, where the private road is. 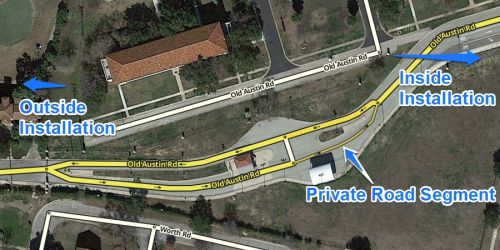 Most roads within a base are set to street.

Most military bases do not need an area placed around them. Smaller bases can have an area placed on it. If you can fit a large majority of the base into the screen at the 500' level, then it qualifies for an area. NOLF Imperial Point is an example of this type of setup. Make sure all roads in the area are created and treated just as any other road. If there is only one road in/out, the private gate does not need to be set up, as there is no need to restrict the general population as Waze will not route through the base.

PHOTOS OF ANY KIND ARE NOT ALLOWED