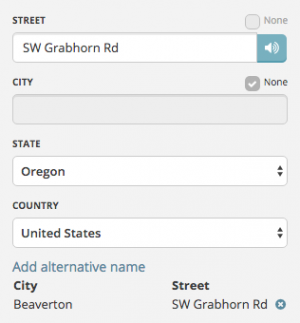 To keep city names from sprawling over too wide an area in the Waze app, WME and Live Map, except for within military installations a city name should only be used as a primary name for segments located in areas determined by local leadership to be displayed as cities on the map. This generally includes incorporated cities, towns, villages, etc., as well as census-designated or other unincorporated places recognized as city names by the USPS, but rules vary by state. This may mean that many addresses on the map are in “no city” areas, particularly in rural regions. The Waze addresses on these segments are otherwise not searchable without a city name, and because many Wazers will search for a location by its postal address, U.S. community leadership has established the above editing standard.