Generally, there are two different forms of place-within-a-place naming. The first, Place – Larger Place, exists in certain situations where the larger encompassing Place either is little more than a collection of smaller Places or is expected by its nature to contain smaller Places. The second, Place (inside Larger Place), exists where a smaller Place, of a chain or type which is typically or at least often found as a standalone business or building, is found within a larger Place and is accessible only by entering the larger Place.

When both forms might apply to a given Place, the Place – Larger Place form supersedes and should be used.

For certain larger Places of the types listed in the table below, use the Place – Larger Place format for smaller Places within the larger Place.

The names of the store and the shopping center should be included in full.

All buildings and other facilities and departments on a university campus should use the name for the building, facility, or department, followed by a hyphen or en-dash set off by spaces, followed by the name of the university.

The name of the building or other facility should be included in full, with the exception of certain elements of the name (typically, first and middle names of the people after whom the buildings are named) which may be included in a building's official name but not generally included with the name in textual references thereto. Generally, if the first and middle name are not included on the university's campus map, don't include them in the Place name either. For example, John Giffen Weinmann Hall at Tulane University should be named Weinmann Hall – Tulane University.

The name of an academic or administrative department may be included in full, using the same formatting as above, as an alternative name on the Place for the building which the department occupies. Further, if a school of the university (such as a law school, graduate school, medical school, etc.) occupies a single building on the same campus as the university and therefore does not have its own Place, add the name of that school as a further alternative name to that building.

Where a smaller Place, of a chain or type which is typically or at least often found as a standalone business or building, is found within a larger Place and is accessible only by entering the larger Place, use the Place (inside Larger Place) format. 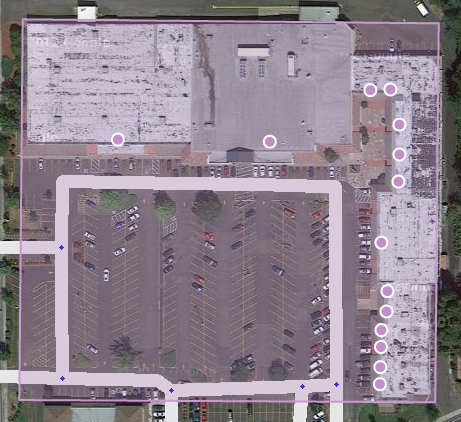 A simple shopping center, when mapped in this manner, would look like this first image: