A wayfinder is a junction that instructs users on a certain road how to continue on that same road, in situations where it may be unclear, and there would otherwise be no instruction. The simplest case of this is a surface road with half of its travel lanes splitting off to another road, half of its travel lanes continuing on the same road, and no overhead signs with extra information. A single turn instruction override can force an instruction to provide wayfinding for the continuing traffic.

However, most wayfinders are more complex than this and require "stub" segments to present information on signs along with turn instruction overrides to specify instructions. This page focuses on wayfinders in freeway interchanges and will explain criteria, configuration and different use cases. 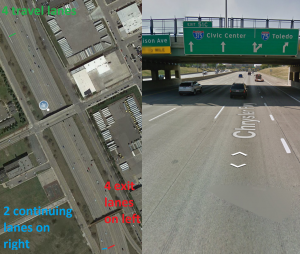 Multiple methods exist for forcing instructions on highway continuations, such as matching the road type of both outgoing segments even where it creates a discontinuity or falsely using an alternate name on the non-continuation side to match the continuation side. Since Waze editors have the ability to create turn instruction overrides, the preferred approach is to use correct road types and alternate names, stubs named to match signage and turn instruction overrides where necessary. This includes preserving name continuity by adding route designations as alt names on continuation stubs. Name and road type continuity through wayfinders allows big detour prevention (BDP) to work properly, where applicable, and improves the overall appearance of the map. 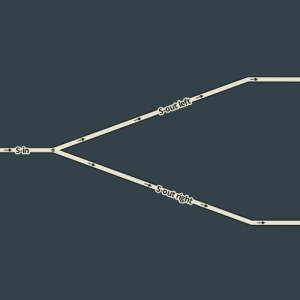 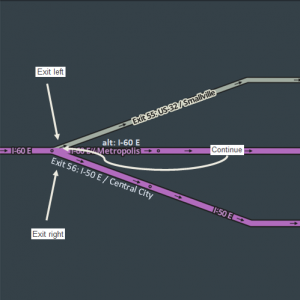 Out segments should be named with the information displayed on the roadway signs. All road segments that continue an existing route must have the route name as either a primary or alternate name.