This new page is currently undergoing modifications. If you would like to contribute to this content, please consider posting in the Australian forum first to discuss your ideas.

Q: How many lanes should you map at the end of a segment? What counts as a lane?
A: Map any lane that achieves full and consistent width for 50 metres BEFORE the turn itself.

For a freeway exit lane, this means a lane that is full width for 50 metres BEFORE the tip of the painted island.


Consider what the road looks like to a driver - make the number of lanes in the lane guidance display conform to what the driver will see.

Freeway exits and other ramps or turning lanes

The exit lane does not reach full width until the painted island; map as part of the rightmost continue-straight lane.

This exit lane is not full width for 50 metres before the painted island.

One exit lane does reach full width 50 metres before the island the other does not; Thus one is mapped as part of the leftmost continue-straight lane and the other is given its own lane.

Example 3: Not A Separate Lane The turning lanes are too short (The solid white line denoting the lane is full width is less than 50 metres). Do not add lane guidance.

Some two-way streets have a center lane marked as a two-way right turn lane (TWLTL). Pavement marking arrows may or may not be present.

When adding lanes on a road with a center two-way left turn lane,

Vehicle restrictions may sometimes only apply to a portion of the roadway (eg bus lanes). Only include these restricted lanes in lane guidance if they are available to users on the segment in question. In the example below, the bus lane allows for left turning vehicles to use the lane, so it is included in lane guidance.

Only map lanes on HIGHWAY road types (i.e. FREEWAY, MAJOR HIGHWAY, MINOR HIGHWAY or RAMP). They may also be mapped on other road types at intersections with the four HIGHWAY types.

There are some cases where lanes should be added to reassure drivers that they need not switch lanes, or that they may not turn from the lane they are in. In the example below, both lanes of the highway off-ramp must turn right — drivers have no choice. Lane guidance should be added to reassure drivers in the left lane that they need not change lanes and to reinforce the prohibition on the left turn to reduce the chance of them making a wrong-way turn. 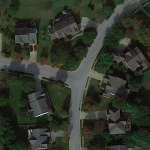 See How Waze selects lane arrows for information on the default turn arrows.

Always review the lane arrows displayed in the Lanes pane carefully once you have applied your edits. Use override when it makes sense to do so, and leave the “Waze selected” setting in place otherwise. Do what makes sense to the person in the driver’s seat—choose the arrow which is going to make the most sense to the driver based on what they are going to have to do (continue straight, U turn, slight right, etc.) and what they are going to see as they approach the intersection or interchange where they need to make the maneuver.

This happens in some locations because Waze road segment width does not match the real life road width. This can result in turn angles on the map which are somewhat different from the true turn angle. Lane arrow override may be necessary. 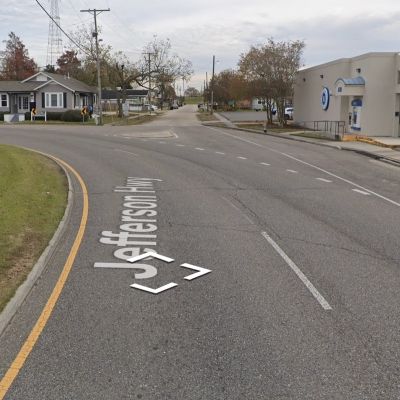 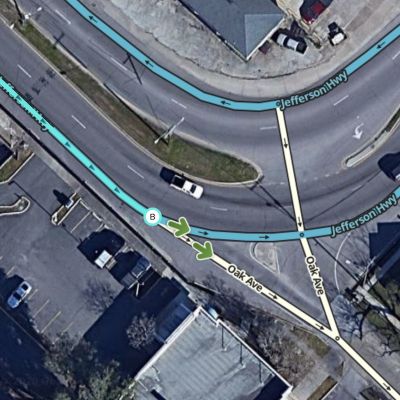 Before adding lane information, check both aerial and street view to make sure how many lanes there are on the segment at the node(s) where you are about to add lanes. See What counts as a lane? for more.

1. Select the segment to which you would like to add lanes. 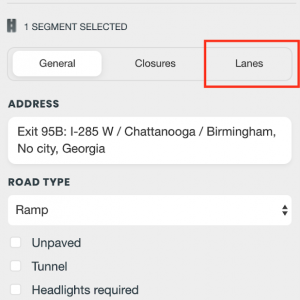 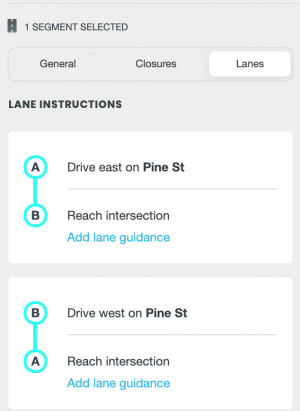 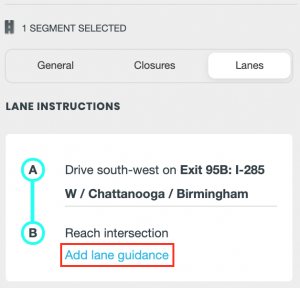 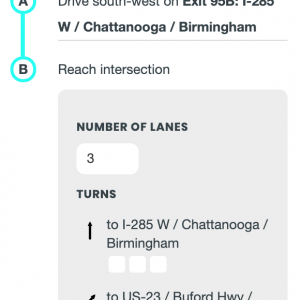 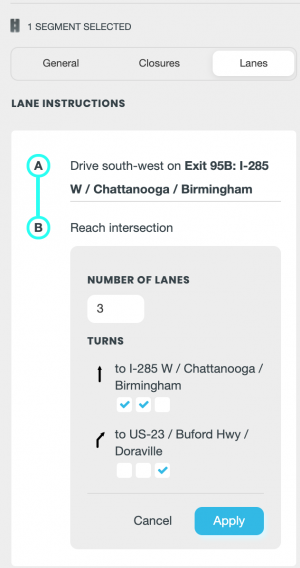 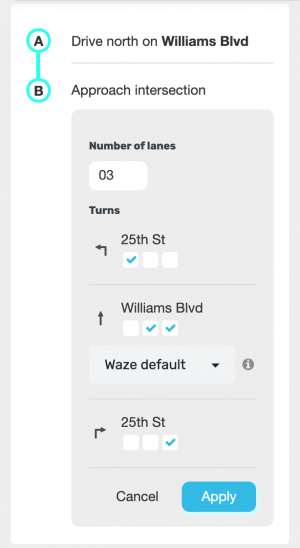 Editing existing Lane Guidance for a segment is done similarly to adding the lanes for the first time:
1. Select the segment.
2. In the left pane, click the Lanes tab. 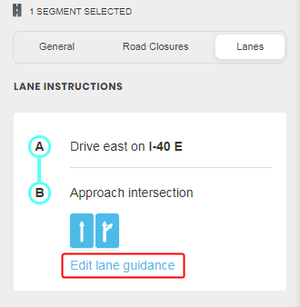 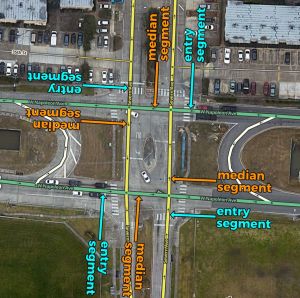