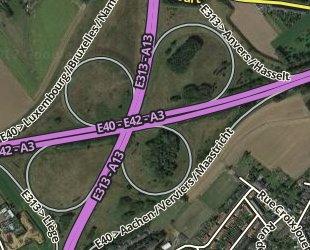 Exits: If the exit has a number and/or is known by a name, they must be added to the name of the ramp. The exit is followed by ">" and the destination names from the road signs. If there are multiple cities mentioned, separate them by a '/' slash. Preferably only the first two destinations are used.

A ramp gets the highest lock from the connected segments.