Figuring out which streets in Waze Map Editor (WME) are one way or not has become much simpler with the advent of embedded Google Street View (GSV). This, though, doesn't make it automatic as the streets themselves don't necessarily have proper signage or other features that ensure the street being viewed is definitively one to two ways.

In the process of determining streets' status, I have found an inductive reasoned approach is best to determine the directions of streets other than actually driving them.

Most signs can not be seen from the Map Editor satellite view. Instead GSV is almost necessary, short of real world driving. In a very few cases, using an online map with a birds-eye view, it has been able to get a shape of a stop sign, but generally birds-eye view is of little value in sign determination. 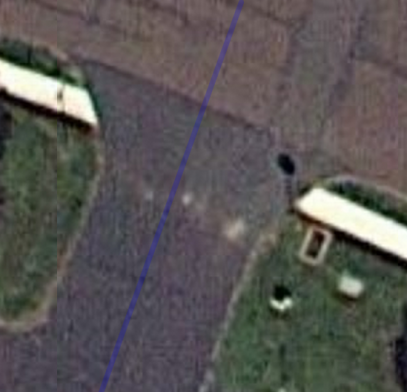 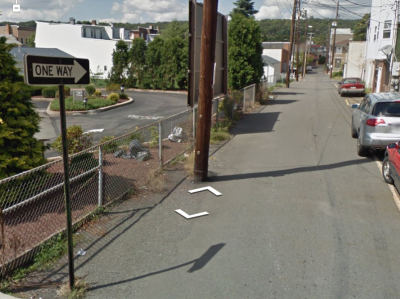 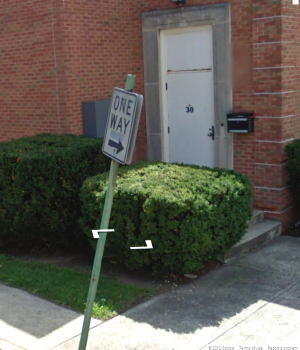 One of the best signs for locating One Way streets at the beginning of segments. 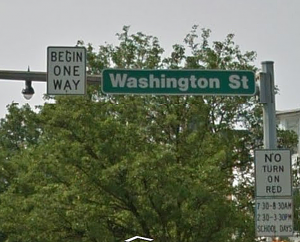 Do Not Enter signs

These, again for the most part, are the familiar standard square signs with the red circle with the lettering within. I have seen non-standard signs of this type also. Note that the cars are parked in the same direction on both sides of the street, indicating one-way as opposed to "Don't enter the street this way." 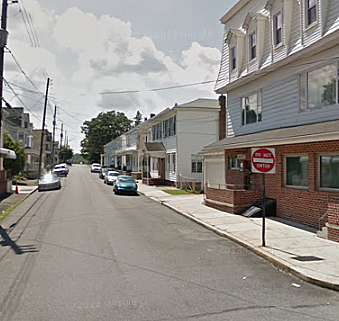 A Do Not Enter sign doesn't always mean that the street beyond is necessarily One Way. In some cases, the sign is there to prevent entry due to existing traffic conditions but the street behind the sign can be itself Two Way. Double check other indications listed below to confirm. If you do see a Do Not Enter sign with Two Way traffic beyond, use turn restrictions instead of One Way designations.

A stop sign is an excellent indicator of a street NOT being one way. If you see parked cars facing the other way of the stop sign, the street is most definitely two-way. 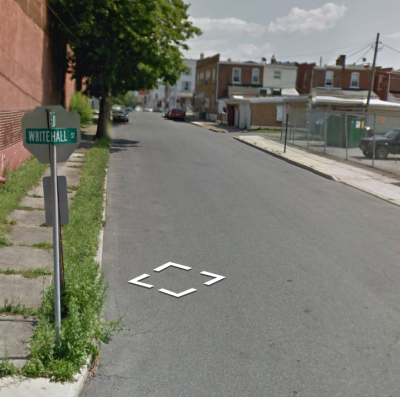 On One Way streets the signage will be pointing in the direction of traffic. If there are no other ways of determining the street status, check to see if signs face different ways on both sides of the street. This is usually a reliable indicator of Two Way Traffic. 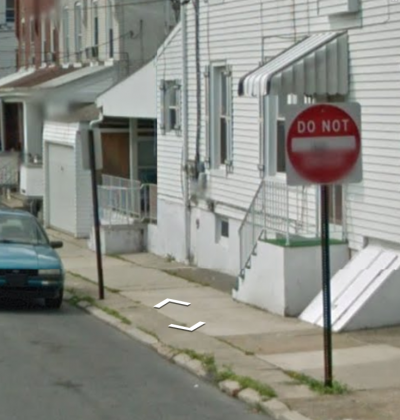 Most Identifying One Way signs are located at intersections. Rather than using GSV to "drive" along the streets in question, move the indicator from one intersection to another to save time, before "driving" down the street to check for other indicators. 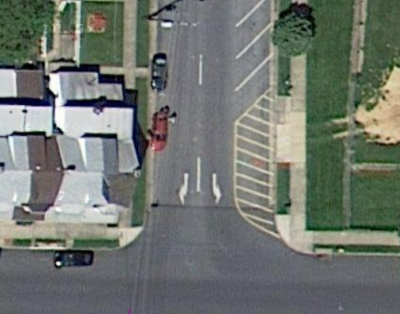 Painted street lines are readily visible in both satellite and GSV views. Gold single or double, dashed or solid lines are good indicators of two way roads, where white lines only, usually dashed, indicate one direction of travel.. 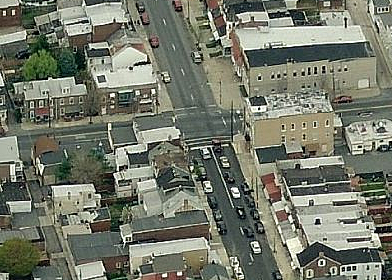 Satellite or GSV:
The direction that cars are parked are a good indicator of street flow direction. If all the cars face the same way on both sides of the street, you should be able to make the argument that the street is one way in that direction. 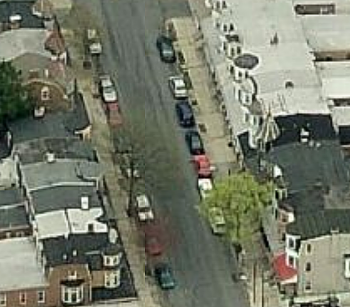 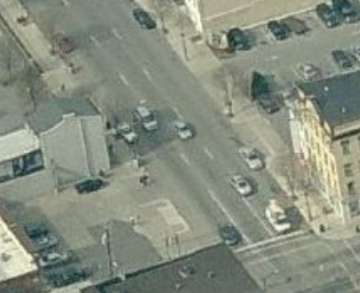 GPS points that have multiple arrows going in the same direction without opposing arrows is a decent indication of a One Way street, but it is not conclusive. Again, use other more definitive ways of determining the direction first and use GPS points only to back up your findings. 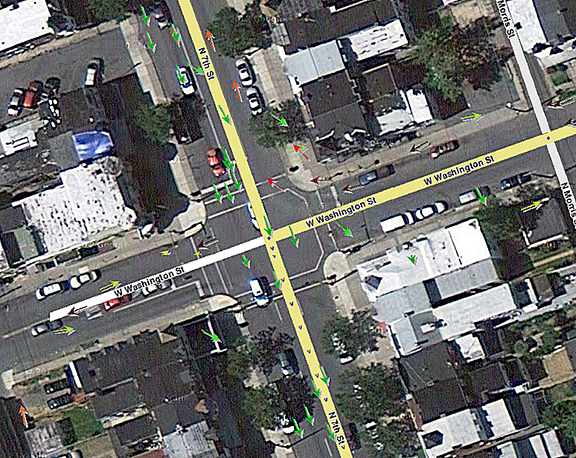 This is an example of an intersection in Allentown, PA, where N 7th st.. above Washington St.. changes from 2 way to 1 way travelling south. Notice how the GPS point arrows change to all green below the intersection.

Alleys that seem to have been a standard design plan in Eastern Pennsylvania, are almost always Two Way. If I see no signage and no other indicators, I assume they will be Two Way. In some alleys, I have seen small one way signs on alley intersections where no other signs exist, so look at these smaller intersections first.

By clicking on the One Way (Blue) option, existing one-way street segments will be easier to see. In this example, I have also highlighted parking lot roads in purple.

In a few cases, after I have determined a One Way street, I have selected all the segments of the street and applied the one way status, only to find that some segments are going the other way! Depending on the way the streets were created, A-B segments can change in reference to Cardinal points. For instance, if a road is created from right to left, the "A" terminator will be on the right. Beware of streets that on multiple segments have different A-B orientations. On multiple segment operations, the one-way status will be varied in accordance to their initial A-B direction setup! 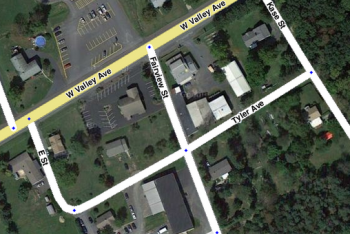 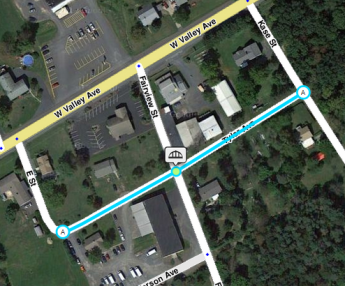 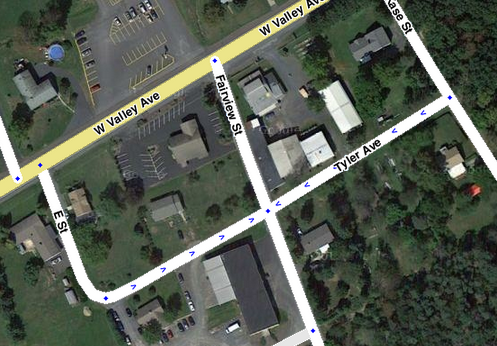 The 1st image shows a 2 segment street (Tyler Ave.) that we want to change to one way, L to R. The 2nd image is after both segments have been selected. Notice that both ends are labeled (A) as they were created in different directions. The Blue highlighted node is (B) for both. The 3rd image shows what happened after they were both operated on by the One Way (A-B) action. The result is not what was expected.

In a way to put all these individual concepts together, let's work out a scenario. 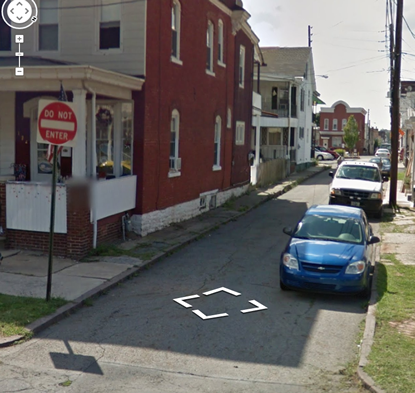 In looking to determine what is one way or not, we come across this intersection of an alley which appears to be a one way street owing to the Do Not Enter sign as well as the parked cars facing us on their left side of the street. Halfway to the other block is an alley. Normally, one way status doesn't change at an alley but, being cautious, we "drive" to the next corner. 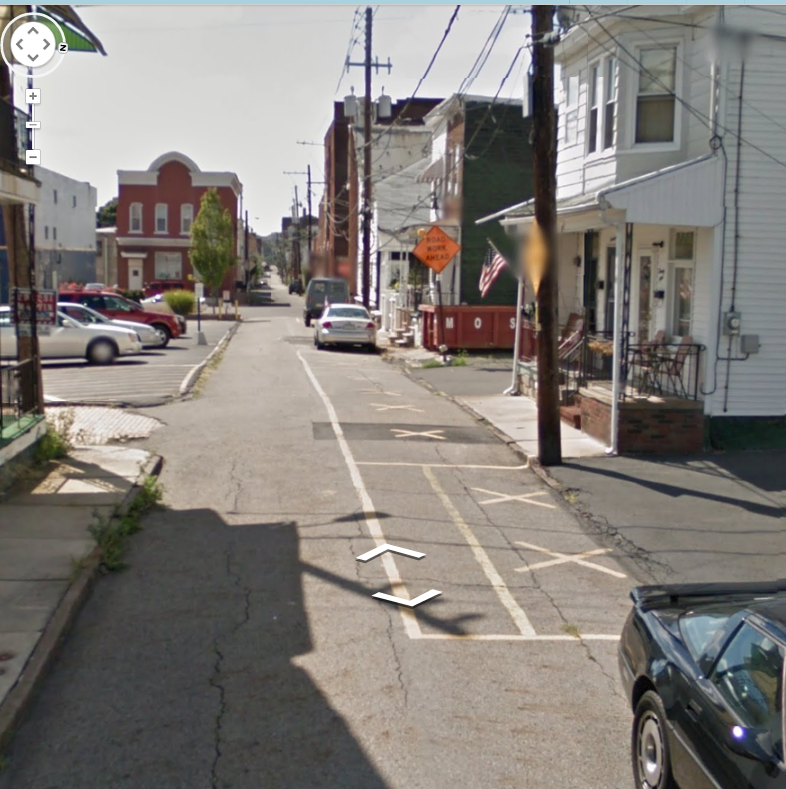 By driving half way up the block to the alley, we are greeted by this sight: Not only is the parked car facing in the opposite direction, there is a street sign pointed our way as well as a stop sign facing our way at the end of the block. There are no other signs indicating any one way condition except the Do Not Enter sign at our starting intersection. Putting all of this together, I determined that the street is only one way up to the intersection of the first alley on the right. Am I right? I don't know, but it's my decision and I'm sticking with it!


This Permalink area of Mount Carmel, PA has been a treasure trove for this project. Although you will find these examples wherever you look, nowhere is there one small area that has so little in the form of identification with One-Way streets. Look around on GSV and Satellite views and see if you can figure out which way the streets go. (Turn off roads and one-way highlighting to make it challenging.)

In most cases, do not make a decision based on only one criterion. Use at least two to be definite. The best is a directional arrow street line, followed by the One Way sign, and then a Do Not Enter sign. Look for parked car directions and then the other ways. When all of them fail, default to Two-Way. If it for some reason happens to be really One Way, a UR or SR will probably show up alerting you to a possible error..