Difference between revisions of "User:Lucaschess100/Venezuela"

The mapraid has begun. It will last until December 8, 2015

There will be 6 teams in this Mapraid. Each team has a rank 4 or 5 editor who will provide guidance on the assigned objectives.

This is not an exhaustive list. If you see any further problems, please fix them!

PLEASE DO NOT MAKE MASS EDITS !! Please do not make edits affecting a large number of segments simultaneously. Historical values stored in each segment are very valuable in the process of resolving URs. Mass edits also massively erase those values permanently. We ask that all necessary bulk edits are reported to the raid hosts, in order to be reviewed and implemented by the local team after the end of the Mega Map Raid, including the edits made with the "Select Entire Street" feature.

Be aware that we will monitor edits, so avoid unnecessary edits and hunting for points. Sanctions are strict, being banned for this and future MR and MMR.

Don't come later and say "I didn't know" or "I did not intend to damage the map". If you are using a tool or script, you are fully responsible for its use and its consequences. There will be no second chances. You can go to the script's forum topic and read all about what they do.

There is no problem if you use scripts to help with your editing. But please note that you are responsible if the use of a script causes problems or damage to the map. Please make sure that you understand completely the features you are using. You will be held accountable for any side effects.

Locked segments?
For segments locked at levels 4 or 5, please check with a local editor before making changes.

Difficult-to-spot geometry nodes
We often use "doglegs" to force a '"turn" instruction instead of "keep" or "exit". his involves carefully placing the node very close to the intersection to achieve the correct angle, so it will be necessary to zoom in to see them. If you make a change, be sure to leave them with the same angle.

City boundaries.
Improving the city boundaries is not a priority. Leave the City/Town field as you find it. When adding new streets, add a city only if you are 100% sure which city it belongs to. In rural areas, leave the city field empty (check the None box). The same rule applies to all major roads that connect cities (highway/Troncal).

The current rules are rather new to our country, and many areas still need to upgrade for route continuity. Therefore, do not decrease road types without consulting a local editor. Road types are explained in English here, or see the Venezuelan wiki page (Spanish).

Also, all unpaved roads should be classified as "dirt road / 4x4".

If you find an area that seems unfinished, please ask a local editor to look at it before you start editing. [contrasts last sentence of Mission]

In our country we have a minimum locking standard for segments according to road type. Any road should be locked to at least the locking level in the table below. Roads that need more protection because of special situations (construction, inaccurate images, complicated design, frequent editing errors) may be locked higher. Do not leave roads locked lower than the minimum values below.

It is important that Freeways, Ramps, and Major Highways are locked according to the table above. Minor Highways, Primary streets, and Streets will be locked only in mature areas.

Note: These are minimum lock levels. To protect certain segments, they may be locked higher. If you find roads locked at higher levels than their minimum, leave them locked at least at the same level you found them.

In Venezuela, elevation levels are like they are in reality. This sometimes requires the use of extra segments. It makes the LiveMap looks more real too. More importantly, it will be easier to close a bridge or tunnel without affecting traffic into nearby homes or businesses.

If you see any elevation you think is abnormal, but do not know the area, contact a Champ or a local editor. If you see a bridge with the same elevation as the segments that precede and follow, please cut the bridge segment at the beginning and end of the bridge. Then, raise the elevation of the bridge by 1 (+1). 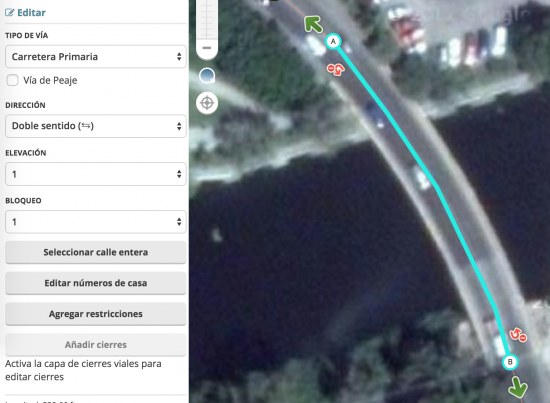 Map editors and trusted App users both make mistakes or omit information while editing places. Incorrect names and categories, incorrect or missing addresses (all businesses should have an address!), incorrect location, and photos that don't match are all over the map. You must use the Place Browser to correct these errors.

Remember that for retails that have many departments throughout a major city's metropolitan area, the different locations must be identified.

If you are inside a Mall, add the Mall name to the retail.
For example: Mc Donalds - CC Sambil Maracaibo.
If not within a Mall, the name gives the location of that branch of a chain.
For example: Farmatodo - Alta Vista.

To know whether a place should be point or area, check the Places page.

Check if a gas station has the correct details. The name format is E/S XXXX, where XXXX represents the name of the Gas station.


When gas stations have an interior street, it must be a PLR (Parking Lot Road).
DO NOT DELETE GAS STATION PLRs.

When checked and complete, gas stations in Venezuela should be locked to level 4. If you find any problems with a gas station, contact a local editor.

In Venezuela, abbreviations are not used in streets or places, except for those indicated in this document.

Developments may include Houses, Apartment Complexes, or Condos. Developments should be indicated as points, not as areas. The category is Lodging (Alojamiento) Avoid abbreviations in the Name to make it easier to search in the App When naming roads in the development, include the city to which the development belongs In the road alt name, you may use the same street name, and for the city use the development name (Example alternate name: Urbanisation Don Flore, Accesso 8).

We have detected that the names of some cities are poorly written, whether they are in lowercase, uppercase, misspelled etc. Report these using Nombres de Ciudades Mal Escritos form. Any doubt, consult local editors or group leaders.

If there are no traffic signs, and the road does not have a solid middle line: left turns are always allowed.

In normal two-way streets (double lanes, not divided) with no exclusive lanes between the directions, with simple geometries and no reversible sections, the logic to draw them is as shown in the following flow chart. 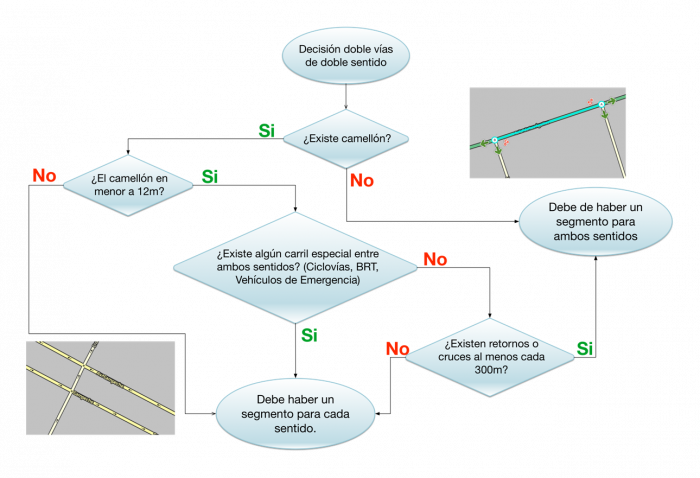 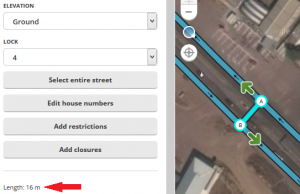 In case the road is divided into two (one segment for each direction, as shown in the previous section), a U-Turn must be a segment connecting both directions, and it should measure 16 meters or more. 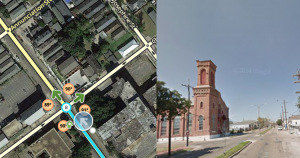 When the segments are divided in reality, but drawn as a single segment in Waze (as shown in the diagram of the previous section), U-turns should be activated at each intersection where it is not specifically prohibited. 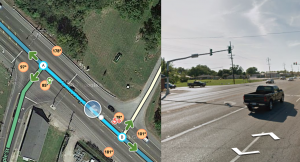 Undivided Roads: U-turns are permitted, if the road is wide enough to allow the driver to make a normal U-turn safely, and when U-turns are not specifically prohibited. Use your logic. Do you think a car can make a U-turn safely? Activate! 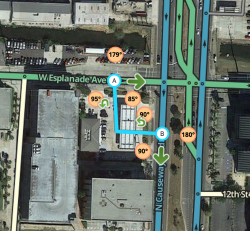 Add PLRs for medium to large shopping centers. Please follow the guidelines for Parking Lots. Add PLR's in other parking lots and drive thru shops where it would be useful for routing. Also, when a place is closer to another segment than to the one which gives access to it, map the driveway with a PLR.

Many of the URs we have in Venezuela are very old. But nothing is harmed if we try to communicate with the reporter. If a UR is over 3 months old, communicate with the reporter. if there is no response after three days, close the UR as Not Identified if you cannot solve it. You can use one of the Spanish URComments lists. If you don't speak Spanish, you can use a double language comment. If the reporter responds in Spanish, ask help from a local editor or use the translation channel in Slack.

Before closing a UR "Not Identified", make sure it really cannot be solved. The information in the UR (even forbidden turn with no additional messages) may be sufficient to resolve it, so do not close before checking.

Additionally, do not forget to leave a closing comment.

Only use sources that are allowed by Waze, like Streetview from within WME. Websites from businesses are considered allowed sources. Other informative pages are:

We will use #Slack Channels. There is a [https://wazemapraid.slack.com/messages/mr_venezuela/ MapRaid general channel] and also a channel for each raid group. Please be sure to join the slack WazeMapRaid Team and join the channels for the specific MapRaid and group you are assigned to. Groups are listed in the forum. If you are not already part of the WazeMapRaid slack team, Click here to get your Slack invitation. Be sure to choose WazeMapRaid to the MapRaid question. If you have trouble getting into the slack team and channels, please reach out to one of the MapRaid organizers.

Many tools are essential for good editing and others make the editing process much easier. Highly recommended are:

¡¡PLEASE DO NOT MAKE BULK EDITS AND REMEMBER THAT YOU ARE RESPONSIBLE FOR THE USE OF ALL SCRIPTS!!

Specific tools for this MapRaid 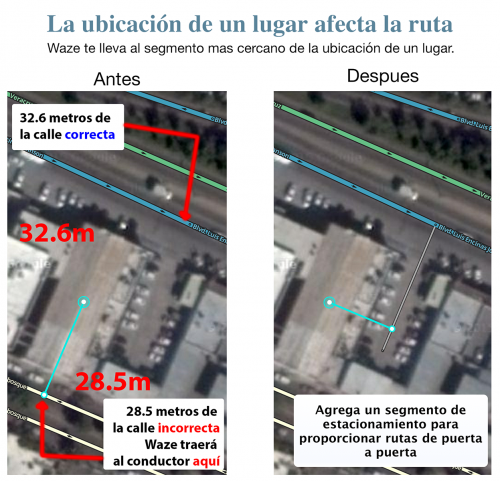 Will be posted on forums.

Some editors really let their bright side out, and let their community skills shine. This is even more evident in a concerted group effort with high-density editing like a MapRaid!. Editors of all ranks working closely with each other and the Champs, really lets us everyone get to know each other, and allows certain editors to be recognized for their skills and effort.


When the Champs see someone consistently editing well, interacting well with the community, and knowledgeable of the various details from the Wiki, they can issue promotions. This can be anything from the size of a managed area, to a rank increase, or even a new role.

The following editors have earned our respect and gratitude for a job well done. Not all have received a promotion, but all will be recognized and we are grateful for their help.

This Mega Map Raid will be divided into 6 areas. Raid areas are shown on the map, with links to each area. 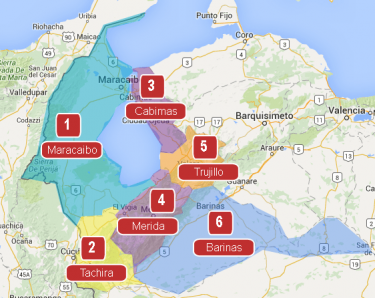 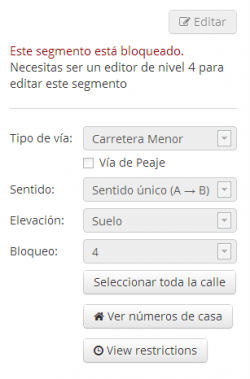 In Lucaschess100 we have a set minimum standard for locking roads based on segment type. Any road of a certain segment type must be locked at least to the rank (level) in the chart below. Roads may be locked higher for protection and special situations (areas with construction, tricky design, frequent mistakes, imaging inaccuracies, and the like), but should not be locked lower.