To keep city names from sprawling over too wide an area in the Waze app, WME, and Live Map, except for within military bases, editors follow standards of placing the city name on segment details only within the boundaries of the area determined by local leadership to be displayed as a city on the map. This is generally an incorporated area like a city, town, village, etc., but could also be a census-designated or other unincorporated place with a name recognized by the USPS, but rules vary by state. This may mean that many addresses on the map are in “no city” areas, particularly in rural regions. 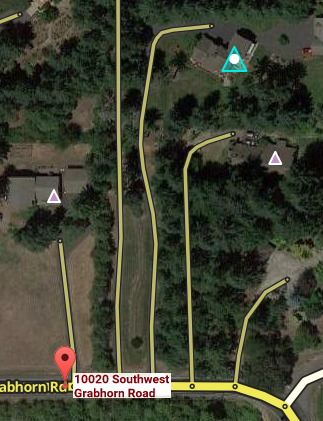 An editor can create a Residential Point Place (RPP) in the correct location with an accurate address, but Waze may not route to the RPP if the city is not on a nearby segment. It will turn up under the "more results" tab in the app, but will be listed without a city and thus unlikely to be chosen.

Waze search defaults to the best match of search terms, whether they're entered in search fully or selected from the autofill results. If the Wazer enters or selects a postal address and there is none on the Waze segment, Waze will go to its Google backup data that matches and will route to that pin. That’s not always optimal, especially in rural areas or other locations where the destination is some distance from the named road.

There are sometimes multiple city names in use for an area — a municipality or a Census Designated Place (CDP), in addition to the postal address.

For example, these images show a discrepancy between Waze RPP and Google coordinates, and where the Waze app puts the search result. The example shown in the images is 10020 SW Grabhorn Rd, Beaverton, OR. 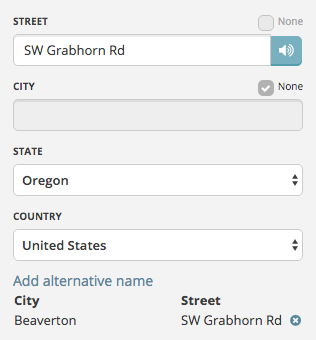 Because many Wazers will search for a location by its postal address, U.S. community leadership has established an editing standard:

There are other standards in place for other purposes requiring adding other street data in the alternate. The addition of the USPS data does not change any other standards but is in addition to anything existing already on those affected segments.

In the image to the right, the city has now been added to the segment as an alternative name to which the address is attached.

The improved navigation result can be seen in the final screenshot from the app. 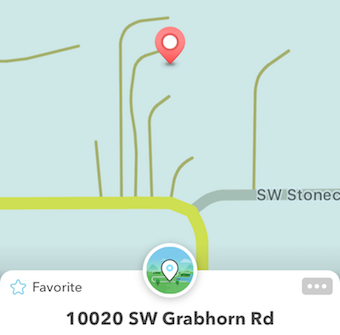 Editors should use official USPS tools to check the city.

Why not just put city name into the primary segment data?

Why don't we just lock the city boundary and use the primary segment data?

Because if you want to grow the city boundary, the only option we have today is to unlock the city and let the tile building process update the boundary. But now, since the primary name would be spread far and wide, the city boundary will be way off.

Why should we play with alt-names just to work around Waze?

Because that's how it is set up right now and like most everything we do as map editors, we work within the current Waze system available to us.

Can't we just use zip code maps to update city?

Is this going to be for everywhere?

No. The use of the USPS city in the alternate street data is only for segments for which the primary address has the "None" checkbox selected for the City because it is out of a city or census designated place (CDP).

This is a lot of work. Who is going to be responsible for it?

There is not yet any precise data, but it is likely that a good chunk of this work is very much rural, in areas with little need for higher lock levels. Most rural roads are going to be L1 or L2.

Is this going to affect every rural segment?

Not necessarily. Only those which have USPS delivery, or are addressable. There are very remote rural areas which do not have USPS service, and therefore will likely not need any update.

Won't this result in a bunch of "duplicate" or repetitive data in WME to maintain?

Possibly, yes. Unfortunately, working within the Waze limitations in WME and search engine is going to require that for some roads, we may be added 2-3 more alternate segment names just to add the USPS city.

Why are we doing it this way? Why doesn't Waze just make their search work properly?

The core of the Waze search algorithm is based on Google search and Waze segment data. They make tweaks and improvements to it over time, but so far, since this addressing issue was brought up 2+ years ago (maybe longer), there has been no fundamental change to the Waze search. In fact, Waze founder and CTO Ehud stated in a US meetup that a search algorithm is so much work to build correctly and maintain, that Waze does not want to spend the time, money or energy to build their own, and are happy to stack the Waze matching process on top of the Google search algorithm.