Tunnel segments and places have unique editing considerations due to their underground setting. Drawing these segments and any underground junctions can be difficult with lack of aerial imagery and traffic data can be affected by the lack of GPS and/or cellular connections within tunnels. Tunnel places also have specific routing and display considerations dependent on the tunnel's primary use.

While tunnel segments gather data like any other road segment, navigation through tunnels is complicated by poor to absent GPS reception and/or cell phone data connections. The Waze servers track each Wazer as they enter and exit each segment along their route, calculating the average speed of Wazers through that segment. This allows the Waze servers to determine whether the tunnel traffic is flowing normally, even when GPS tracking information within the tunnel is absent. 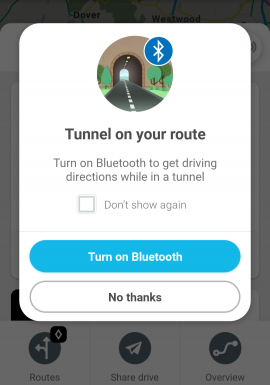 Wazers who select a navigation route that traverses a tunnel with beacons will receive a pop-up prompt at the start of navigation to turn on Bluetooth if it is off or not enabled for the Waze app.

Waze has partnered with municipalities, highway agencies, and other road organizations to install Waze Beacons in select tunnels globally. These battery-powered devices generate Bluetooth signals that provide location data to the app when the driver is out of GPS range within the tunnel. In tandem with a cellular data connection, this allows the app to provide real-time traffic data as it would with a typical GPS connection. Tunnel segments with installed beacons have had their geometry and attributes specifically set by staff to work properly with the beacons and should not be altered in the Waze Map Editor without Champ and/or staff approval.

Due to GPS and/or mobile device data communication problems inside tunnels, the mapping process of the tunnel is difficult if it does not follow a straight path from the entrance to the exit. The important point of any tunnel mapping is to at least connect the two entrances to enable the routing engine to use the roadway through the tunnel as appropriate for destinations on the other side of the tunnel.

On the aerial imagery, find the locations of the two entrances of the tunnel. If you know that the tunnel is a straight path through, you can simply draw a new straight road between the two entrances and name the segment appropriately. If you are not personally familiar with the tunnel path, check for GPS tracks through that area. If it shows a consistent path of curves, then the active mobile devices are able to track and communicate the data back to the Waze server, and you should lay out the road following that path by altering the geometry nodes to match it. Avoid creating separate segments for the roadway if there are no junctions inside the tunnel.

If you know that the roadway is curved by personal experience and there are no matching curved GPS tracks, consider estimating the path of the curves and shape the segment using the geometry nodes. Once that new roadway segment is live on the client app you can drive through that tunnel and if the mobile device has the ability to generate its own internal GPS estimate, you can estimate where on the map your vehicle is relative to the roadway. Note where the road turns before or after the map display and make adjustments when you return to the map editor later. Although it is not critical that it match exactly, it is helpful for drivers to have the visual route be similar to the real road as they pass through the area. 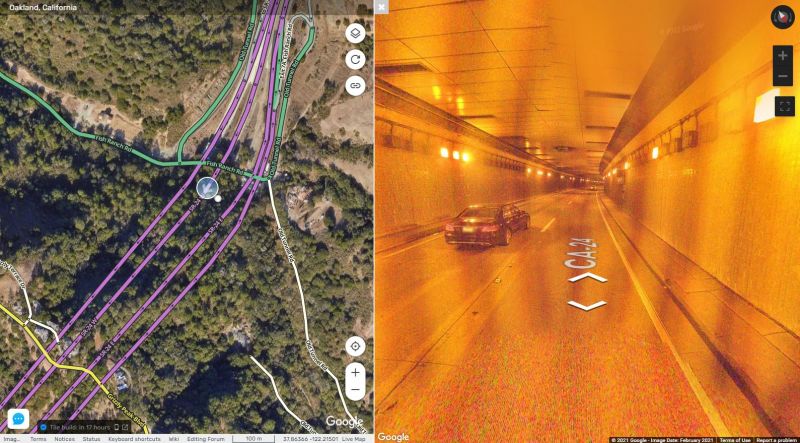 Some roadways through tunnels include forks or exits to other roads inside the tunnel. Creating these junctions is done the same as with any other junction. As described in the section above, the GPS tracking and navigation may make it difficult to know exactly where in the tunnel that turn truly exists. In the case of junctions, it is more important to be more accurate in the estimate of the actual roadway fork or exit so the navigation instructions match the roadway as closely as possible. Street View can be a great help here if available.

Tunnel segments should follow road name standards and should not be changed solely to the name of the tunnel unless it is the road's official name. If the tunnel's significance warrants the inclusion of the name for navigation purposes (i.e., as part of the "let's take..." TTS at the start of navigation, in hazard, closure, and other reports, etc.), the tunnel name can be appended to the primary name using a bullet (•) and proper abbreviations and acronyms (e.g., "I-376 W • Fort Pitt Tun").

Ensure that the "Tunnel" checkbox is checked. This attribute provides several benefits across the Waze platform, including GPS trace filtering for the map editor, an alternative crosstime calculation logic for the routing server, and, within the app, user position extrapolation and night mode display toggling.

Consult the local state editing community to see whether a tunnel segment should have the "Headlights Required" box checked. Some states require headlights to be used in tunnels by law, whereas others encourage, but do not legally require, headlight use.

If a tunnel requires a toll to be paid in order to pass through the tunnel, use the same toll road controls as for any other roadway segment. Tolls may be collected outside of the tunnel, so care should be taken to appropriately place the toll segment attribute.

Tunnels should be set to -1 elevation (or lower if necessary for overlapping tunnel segments). Tunnel segments should generally be cut at least 15m/50ft before and after a tunnel to allow time for adequate GPS signal entering and leaving the segment. Do not cut segments for elevation purposes if the tunnel begins or ends within 60m/200ft of an existing junction.

Tunnel places can serve as a routing destination and as a landmark label on the map. As destinations, these places allow users to navigate to a tunnel entrance or to add the tunnel as a stop during navigation to get a preferred route. As a landmark, a tunnel place is represented by a label and polygon on the map to help users orient themselves relative to the rest of the map or identify which tunnel they are traversing.

Active road tunnels should be added as area places. The geometry of the polygon should be limited to the area of the tunnel bore and care should be taken not to cover any open area between multiple bores if they are significantly spaced apart. This prevents the area place layer from covering portions of other map layers between the bores in the app (see bridge place geometry for a visual example).

Tunnels that are not actively used for traffic (e.g., pedestrian and rail tunnels) should be added as point places to be used solely as a routing destination. As the features are below ground and non-navigable to road vehicles, they do not serve a purpose as a landmark.

When a tunnel crosses two or more city names within a state:

If a tunnel crosses state or country borders, select the state that encompasses a majority of the tunnel or consider mapping two area places in their respective state and/or country.

Tunnels that are not active road tunnels should have their address set like any other place.

This should be an official or locally-used name, preferably signed at each approach. Do not map unnamed tunnels. Tunnels should follow the general standards for naming Places; do not abbreviate the word "Tunnel".

Entry points should be added according to the navigation needs of the tunnel place:

Completed tunnel places should be locked to at least 2, though regional guidance may require a higher level based on road type, landmark importance, etc.