Difference between revisions of "Scheduled reconfiguration"

In high-traffic areas, local governing authorities will often give advance notice regarding changes such as the opening of a new highway or interchange, the reconfiguration of a ramp or intersection, or a temporary construction detour over a new roadway or contraflow lane. With careful timing, Waze editors can proactively use this information to schedule routing changes in the area in order to minimize any potential disruptions to navigation. When a reconfiguration is simple enough not to significantly change routing, such as merely moving an exit a couple hundred feet, scheduling the change in WME is not necessary, and the map can simply be updated at the time of the change. However, when a reconfiguration is complex and significantly changes routing for a large number of people, it should be scheduled in advance. This article describes the procedure for implementing scheduled reconfigurations.

More than two months from reconfiguration 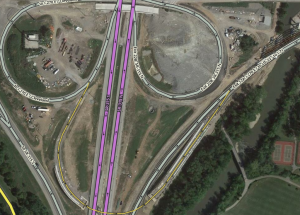 The new ramp has been drawn at the bottom of the image as a private road with a restriction for all vehicle types at all dates and times.

Road projects progress in stages through planning, design, earthwork, paving, painting and opening to traffic. Planned roads should not be mapped without any sign of their existence in the real world, but during the construction stages the alignment of future roads may become visible from aerial imagery. When this occurs the roads can be added to the map.

Less than two months from reconfiguration 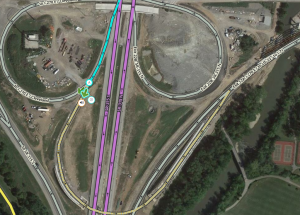 The new ramp has been drawn at the bottom of the image, and a restriction has been added to it with a turn-instruction override to suppress the unnecessary instruction. 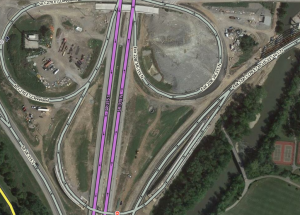 After a day or two, and before the change has occurred, check for a tile update. After the tile update, the new segment IDs will have been loaded into the closure database, and real-time closures can be added onto them.

Create an MTE and prevent unused routes after reconfiguration 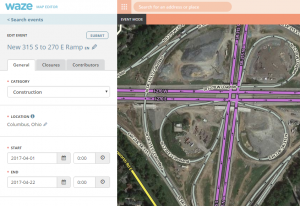 A new event is being created in event mode. 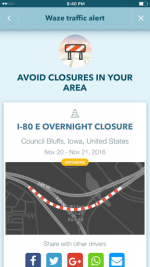 A notification for an event-related closure

Adding closures and submitting the event 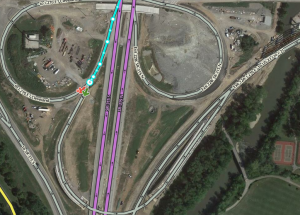 While the closure on the old ramp is still active, the turn to it has been restricted.

After the reconfiguration has occurred, restrict turns to any old roads that are no longer used. This will prevent routing after a tile update, even if the real-time closures on such roads are deleted or expire. This step is necessary, because closures must be maintained to prevent routing until the tile update.

Alternatively, remove the closures temporarily from unused roads, add time-based restrictions for all dates, times and vehicle types, then reinstate the closures. Make sure not to do any edits that change the segment IDs of the roads that will be deleted, so that closures can be reinstated.

Remove closures and clean decommissioned roads from the map 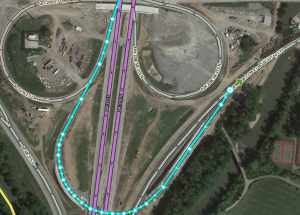 The old ramp and unnecessary nodes are being deleted.

After a tile update puts the new restrictions into effect, it's time to clean up the map.