(Redirected from Junctions and roundabouts/United Kingdom)

As with all mapping in Waze, all types of junctions should be drawn as simply as possible to give clear instructions. At this time, November 2017, Waze does not give lane guidance and adding additional segments at junctions can lead to complex & confusing instructions and the possibility of introducing errors. For a comprehensive guide on editing junctions in general please read the Global Junction Style Guide.

T-junctions, cross roads, and the majority of junctions are usually best mapped as single 2-way segments that are connected with a single node. Complex junctions that include restrictions, large (distinct) turn lanes may benefit from a more complicated layout.

The original UK map import , know as the UK basemap, had a lot of junctions mapped as split 1-way roads due to little more than some painted chevrons in the middle of the road. This is completely unnecessary, and any remaining should be simplified where possible.

As Waze does not currently support lane guidance, the addition of KL/KR instructions should only be included under certain lane drop conditions. A lane drop is when one or more lanes of the main carriageway separate off onto a junction. Extra lanes which appear and for which you have to cross a dotted line to reach are not a lane drop

Reasoning: drivers often would like an indication that the road is changing.

Reasoning: if there are 2 drop lanes and you've accidentally kept to the left, correcting your mistake involves crossing another lane of possibly faster traffic.

The position of the KL/KR junction is also important. The general rule is to have the junction at the 0-mile point - the point at which the distance countdown on the signs reaches 0 - normally a gantry. The problem is that drop lanes are often quite long. Whilst you should be in the correct lane at the 0-mile mark, most drivers change lane much later than that. It can also cause problems if there are any splits after the first one. You may get a second KL/KR instruction whilst it's still possible to change lanes from the first split.

Roundabouts are no exception, most can be mapped with single 2-way segments for each connecting road. Much of the UK basemap had pairs of 1-way entry and exit segments which are not necessary. If you are rebuilding a roundabout take the opportunity to remove these segments. They will look much better on the client and can lead to normal roundabout instructions.

Steps for redrawing a roundabout

After drawing a new roundabout, it is important to change the road type to that of highest connecting road (except Freeway), and set the address. To aid navigation instructions, roundabouts should not be given a Street name. If the roundabout does have a proper, signposted name, then this can be mapped using an Area Place, with the category Junction/Intersection, that fills the centre of the roundabout. 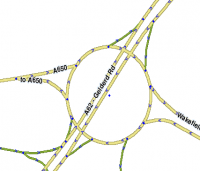 Sometimes a roundabout will get modified to change its shape and function, such that it is no longer a simple a roundabout.

One such example is the Hamburger Roundabout, where the main carriageway goes straight through the middle of the junction. This should be drawn as if the main road was an over pass, with short ramps connecting it to the roundabout. The example here is near M62 Junction 27 (Leeds).

Some roundabouts get modified so much that they can no longer be considered roundabouts at all. This can be seen at M62 Junction 31 (Castleford) 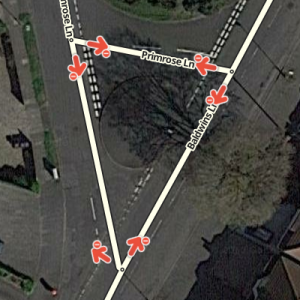 Turn restrictions at a triangle junction

We have quite a lot of triangle junctions in the UK. Some of them are so small they have nothing more than a few square metres of grass in the middle and can usually be simplified into T-junctions.

If they're left as triangles, they can be problematic. For any route through the junction, there are 2 possibilities: the "sensible" route following one side of the triangle; and the "silly" route following 2 sides. Because the triangles generally aren't very big, GPS accuracy isn't good enough to distinguish which route a driver actually takes. So if Waze decides a silly route is faster, then for most drivers who ignore it and take the sensible route, Waze will still think they've gone the long way round and reinforce that route.

If a triangle is large enough to be mapped (e.g. has a large amount of grass or a tree on it), then restrict all internal turns to force Waze to use the sensible route through these junctions.