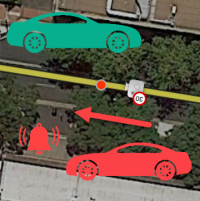 Setting the speed to zero ensures a consistent user experience for red-light camera warnings in the Waze app. This convention will be revised if/when the app is changed to provide both warnings for a dual-function camera per forum discussion.

In general portable cameras are temporary and not mapped in Waze as they can be difficult to manage.

Users are encouraged to report mobile speed cameras via the Waze app as "police speed traps".

Be aware that only one of the warnings (either "start of average speed zone" or "camera ahead") may be given due to them being within 400m of each other.

Only fixed cameras for normal traffic are mapped in Waze. Cameras that are only for heavy vehicles (for example average speed cameras in NSW) are not mapped, as explained below. A dummy camera may be used if needed to prevent user requests.