In Maryland we have a set minimum standard for locking roads based on segment type. Any road of a certain segment type must be locked at least to the rank (level) in the chart below. Roads may be locked higher for protection and special situations (areas with construction, tricky design, frequent mistakes, imaging inaccuracies, and the like), but should not be locked lower.

Note that these are minimums and, for protection, certain segments may be at higher lock levels. If you find a road locked to a higher level than its minimum, please leave it locked no lower than that level when you have finished editing.

Maryland follows the national guidance for marking road with 24/7 headlight use requirements. This includes tunnels which are properly marked with black and white regulatory signs. In addition to, or in substitution of the FHWA signs shown in the national guidance, Maryland editors may also encounter the following signs: 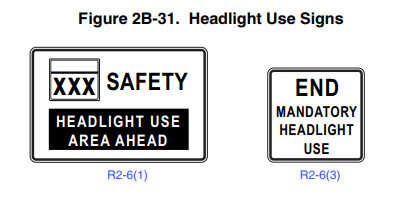 Maryland follows the national guidelines for adding speed limits to the map. There are a few items left up to local guidance which will be enumerated below.

In Maryland, it is a best practice to map speed limits on all segments primary street and above. Local street segments without a posted speed limit should not have a speed limit added in Waze. This is because the statutory limit (see below) would be between 30-35 mph, and might be confusing to users.

Maryland law includes the following restrictions on the designation of speed limits. [1]

, or a regulatory speed limit posted in black on white with an orange "Work Zone" banner across the top

We only consider the regulatory signs, and never map advisory speed limits.

Maryland is a state where the speed limits are absolute and are enforceable from statute; speed limits need-not be posted to be enforced.

When adding speed limits to WME we should try to be as accurate as reasonable, while still preserving data for turn delays. Therefore if a speed limit changes in middle of a segment we will create a new junction to support the SL change. However if there is already an existing junction, or we can see the need to create a new junction to connect another segment to the road within 200 feet of the speed limit sign, we should mark the SL change using that existing (potential) junction node.

If at the editor's discretion in consultation with local managers, it is determined that a new junction to support a SL change between 200 - 1,000 feet away from a junction would have a negative impact on turn delay calculations, they may instead affect the SL change at an existing (potential) junction up to 1,000 feet away from the SL sign. This may be because the SL change is posted in middle of turning or exit lane where traffic regularly backs up from the following junction to before the position of the SL sign.