Waze keeps its own internal database of addresses, or what is called house numbers or HNs. These addresses are used only when a specific address is searched from the Waze Map Editor or Waze client app. House numbers are independent from any other address or mapping provider.

House numbers are points on the map and can be adjusted at a fine level of detail to ensure Wazers are properly directed to the correct location for that address. It is therefore important to pay attention to all details regarding house numbers to ensure proper routing.

House numbers are attributes linked to road segments, whereas residential point Places (RPPs) are independent from road segments, and vary in the following ways: 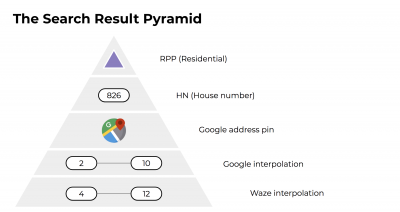 The following is a simplified order listing, other more complex items can come into play during search queries: 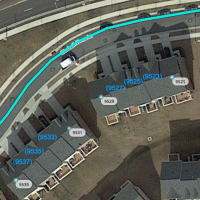 Waze will not be doing any future imports or merges of external data for house numbers. It is therefore very important that any new roads you add must have house numbers added in order for Waze to provide accurate routing to those addresses. Each road segment with a house number must have a primary or alternate city name for the Waze house number to be searchable. Therefore if not in an incorporated city, town, or village and your region does not use township, census designated place, or parish name; then add the US Postal Service's city name as an alternate city name for the road segment.

To edit, update or delete house numbers on a street, select any segment of the road then click the Edit house numbers button or tap the H keyboard shortcut.

The lighted area around the road is the default distance that house numbers are allowed from the street. If a house number must be located beyond that distance, you will need to Force the house number into place (discussed below).

When the house numbers interface is activated, a new toolbar appears with the standard complement of action buttons specific to working with house numbers.

The two images to the right show what a house number looks like in the editor. Which one is used depends on the density of house numbers and how WME determines the marker should be flipped for best visibility and handling.

The house number itself should be placed on the center of the rooftop of the house. For large buildings such as box stores which have a single address, and addresses within shopping malls, it is recommended to NOT add the house number to Waze. These stores are typically within parking lots and the stop point for house numbers is not a good location for navigation to end. For these locations, use a Residential point place (RPP). A Place point or area with the store, restaurant, park, etc. name should also be added.

To add a house number, click the Add house numbers button on the toolbar or tap h on the keyboard. Click on the location of the house or business address. Enter the house number.

The stop point (sometimes referred to as the segment marker) is the location on the segment to which the house number is attached, and this is where the Waze navigation destination will be set in the client app. This is represented by a white dot with a blue outline attached to the street (see the image on the left.

When moving a house number or adding one, you will see a dashed white line leading to a white dot on the road you selected. This white dot is the stop point for navigation to that house number. It can be moved anywhere on the named segment for that address. It cannot be moved to any other segment including driveways (at this time).

The stop point should be placed:

Think of it this way: "If you can get the driver to this point and have the app display a directional marker flag and announce the correct side of the road the destination is on, the driver should be able to figure out which building it is."

The Waze development team is working on a way to specify a stop point on a street other than the named segment to which the address is attached. This is important for any house whose driveway may not be on named street, mall location, unnamed long private streets/drives with multiple addresses, or businesses which have an entrance from a parking lot off the named street. At this time, there is no way to guide the drivers within a parking lot.

There are two categories of errors related to house numbers:

Errors you can force

When the error message pops up:

The following errors can be forced if you are a rank 2 or higher editor:

When you are fully confident there are no errors with any of your House Numbers after you have reviewed the House Numbers highlighted as being in error, click the Save button and then click the Force button.

You will need to fix the errors in order to save. The following errors cannot be forced:

Note that this is the same message as the errors you can force listed above, but when you click the "Force" button nothing happens and the "Force / Continue editing" error message box remains.

Before you tap Esc on the keyboard or click Close, remember to Save your changes.