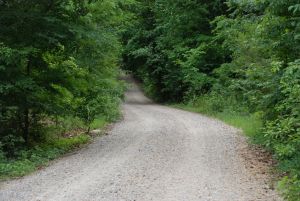 In the state of Minnesota, most unpaved roads are considered dirt roads. Knowing this will help you create the correct road levels. Undrivable roads should not be mapped, should be restricted, or should be listed as a trail instead and not be connected to any functional roads. Even though 4x4 is in the title, we will only use dirt roads for standard gravel or dirt roads that most vehicles can drive on. Keep in mind that because of the way Waze handles dirt roads, we will not use the dirt road class in the city limits of any town. Any in-town gravel roads will be streets.

Because most likely people in Minnesota feel a gravel road is a dirt road, we will use Dirt Road for both examples. Please be aware of any of these dirt roads that are minimum maintenance roads as these roads should have restrictions in place for winter months. 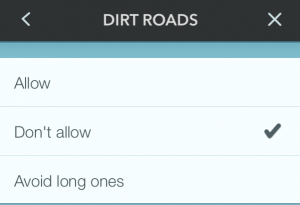 Keep in mind that if the person does allow for dirt roads, Waze will treat the road as a Primary Street so do not try to make an exception to well maintained dirt roads as a street or you will cause the driver to be directed on undesirable roads. Yes, that's right, a dirt road can be seen as a higher priority than a street! This is very important in rural areas where the Street Category should only be used on very short road segments that are paved. In towns, the Dirt Road Category should be rarely used and an unpaved road should be considered a street or a private road. 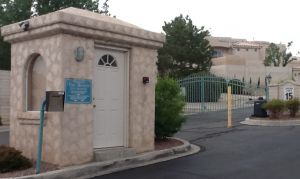 Private Roads should follow the Wiki Example on Private Roads. Please be very limited on using this for driveways as, for the most part, these should not be mapped at all.

Keep in mind that on the Waze App, a private road will look like a street. Nothing looks more off than a bunch of streets connected to a dirt road.

If you are adding a private road for a private housing section, make sure house numbering is correct or there is a place point or area within a private road section. This area will still be able to be navigated to the correct destination as long as it has a proper address to navigate to. Pay attention to this article for more information.

Avoid drawing alleyways unless it is considered a street by the general public. Most alleyways should not be used to direct traffic and will cause unneeded nodes in the road that can cause roads connected to the alleyways to be less desirable. Most alleyways that would be mapped will use the Parking Lot class. 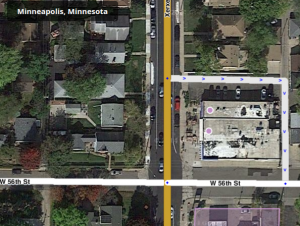 This is a good example of where alleyways will be mapped. This is in South Minneapolis at the corner of Xerxes Ave S and W 56th St. It is also the location of Pizzeria Lola. The parking at this location is on the side of the Cavé Vin building. It is a one-directional section and the only way to leave is through an alleyway. In this case, you would create the section as a parking lot road and you only map out what is needed to enter the parking lot and exit; however, you would not need to map any other section of that alleyway.

Minnesota has been adding roundabouts in many locations throughout the state. It is important to note that most roundabouts should only have three to four connections or it will sound confusing to a driver. Following this Example will give proper turn information and roundabout icons on the screen. If you would use multiple-point access, it instead will say the exit number such as, "At the Roundabout, take the 3rd exit". 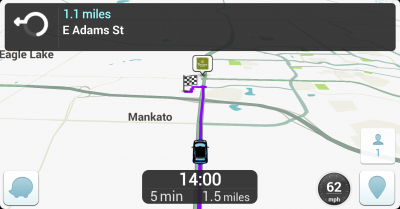 This is an indication of what a user of Waze should see on an upcoming Roundabout. It is clear at showing the direction of the turn. It also will verbally say what is referenced on the signage such as "At the Roundabout, Continue Straight" or "turn left". This is the Minnesota Standard for creating and editing Roundabouts. 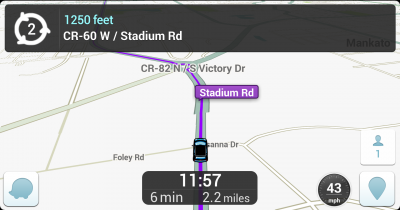 This is how it looks when more than four exit points occur. It does not give clear guidance to the driver on what way to go aside from the highlighted road ahead. This should be avoided, Only add multiple connections per side if the signs clearly mark Exit numbers (Commonly seen on signs showing 5 or more exit points).

Roundabouts will use the same functional class of the main route traveling through the roundabout. Follow This Article for more information.

If at all possible, drive through a roundabout after it has been created or updated. Verify that it seems to give correct information. 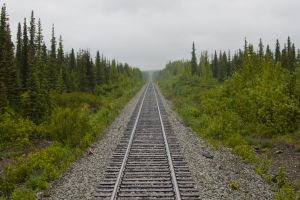 Railroads are not yet added to the map, but these can be added to prepare the maps for when it is. Mapping the tracks allows Waze to recognize spurious speed data from people Wazing on the train and prevent it from corrupting speed data for the adjacent road.

Please follow this Wiki article on Runways for information about how to set runways correctly. These roads should be locked to the same standard as Airport Area itself.