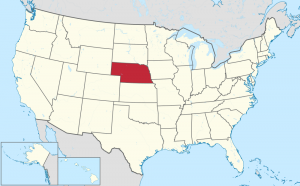 This page serves as the primary resource for editors of Nebraska. Review all the sections to better understand how the guidelines for this state might deviate from the overall USA or worldwide guidelines. If you have any comments or questions about this page or state refer to the community links below.

Nebraska is a part of the Plains region, which includes the states and/or territories of:

Before editing the maps in Nebraska, be sure to fully review and understand the editing manual.

For mapping and GIS system resources, go to Nebraska/Resources.

The Waze forum is a great place to find answers to previously asked questions and also a place to ask new ones. Below are links to the forums specific to Nebraska.

Area Managers for Nebraska can be found in the table below.

Nebraska follows the general road naming and road type guidelines of the USA.

^a State highways never share the same number as any U.S. or Interstate highway that runs through the state.

^b The exception to this format is Nebraska Highway 25A (N-25A) which acts as a spur but is not signed as such.

^c A Link is a highway that connects two major highways.

^d A Spur is a highway that connects a major highway to a city or town where no other highway exists.

^e Recreation Roads are the roads contained within a State Park and are almost never signed but do appear in NDOR and FC maps.

County roads with the name designation of "County Road ##" or "Co Rd ##" are to be named in Waze as CR-##. This shortened version takes up less space on the map screen and is announced correctly as "County Road ##" while navigating with the Waze app.

If you encounter any roads that are named N, S, E, or W, you must add a period (.) to the end of the letter. For example, West N Street is abbreviated as W N. St. This ensures the TTS system reads the road name as "West EN Street" and not "West North Street" This does not apply to county roads or Nebraska state highways and spurs abbreviated as N-##X and S-##X. Waze recognizes these as county roads, state highways and spurs, and pronounces them correctly.

In Nebraska we have a set minimum standard for locking roads based on segment type. Any road of a certain segment type must be locked at least to the rank (level) in the chart below. Roads may be locked higher for protection and special situations (areas with construction, tricky design, frequent mistakes, imaging inaccuracies, and the like), but should not be locked lower.

For the most part, Nebraska's Functional Classification is pretty straightforward. For the purposes of FC, we use the National Function Classification maps. Nebraska divides its FC in to two classes, Urban and Rural, each has a separate table below. Interstates and Other Freeways & Expressways are always drawn as a  Freeway  even if listed under Principal Arterial.

Below is a modified table that matches the National Functional Classification system with the Waze Road Types as per Nebraska standards.

^f There are currently no bannered Interstates in Nebraska.

^g A true controlled-access freeway should always be classified as a  Fw . Some expressways however, are only partially controlled-access and do not qualify for classification as a freeway. Use your best judgment on which to choose.

^h See this forum thread about the decision to upgrade State Spurs that are Rural Major Collectors to Minor Highway.

U-turns are permitted in Nebraska except where prohibited by signage or restricted by local municipal law. [1][2]

The u-turn must also meet one of the following criteria:

Note that when editing, a functional u-turn can arise from more than just the u-turn flag on a road segment, such as with these common scenarios:

Nebraska does not alter speed limits for work zones.

Speed limit changes in NE should occur in both directions of travel at the same point (a slowdown from 65mph to 45mph in one direction has a matching 65mph sign in the opposite direction of travel).

The following are the speed limits laws of Nebraska, except where posted signs indicate differently (most commonly in/near urban areas).

Nebraska follows the standard USA guidelines for all of the following special road types.

In many Nebraska counties, the Dirt road type should apply only to roads that are truly dirt/low-maintenance. Well-maintained gravel roads should NOT be set as the Dirt Road type. They should be at least Street type and potentially as high as Primary Street status. The reason some of these gravel roads qualify for Primary Street status is based upon their functional classification designation. These roads may be gravel, but they are intended to be main routes between towns (especially in rural areas) and are often wider and more frequently maintained. This of course isn't ideal for Wazers who'd prefer to avoid gravel roads, but until an unpaved option is made available to apply as an attribute, it's the best overall option for routing.

Following the spirit of mapping all drivable surfaces, parking lot roads are to be mapped in Nebraska. Please follow the general guidelines and use discretion to provide functionality without overcrowding the map.

Rural driveways in NE should frequently be mapped (as Parking Lot Roads), even if shorter than the general Driveways recommendation of 50 meters. Drivers will often be travelling at a high speed, and an upcoming turn provides the necessary advanced warning of their destination. Driveways also serve as useful navigation landmarks on otherwise featureless rural roads. If they are not mapped, Waze may mistakenly snap to a nearby road and interfere with the speed data or provide confusing directions. When mapping a new driveway, check the House Numbers on all nearby roads to ensure all entries are closest to the most appropriate road or driveway.

Urban driveways do not qualify for mapping in most circumstances unless they meet certain route-aiding criteria as defined in the national standards for Driveways.

Information related to road construction and closures may be found on the Nebraska Department of Roads highway project page.

Nebraska follows the USA standard for Places. Do not deviate from the guidelines without first obtaining consensus to do so via the state forum linked on this page.

In general, do not name parking lot segments. Some exceptions may apply, but please consult with other Nebraska editors before naming segments within a lot.

These name spellings are standardized so that Wazers will receive consistent results when searching in the client. Please use them when you edit one of these chain or franchise businesses.

Laws regarding speed and red light cameras vary between the states and territories, so be sure to understand the details of camera legality in Nebraska.

Based on information researched at the time this page was created, Nebraska does not have any laws regarding red light or speed cameras, therefore they may be present in the state.


This state does not currently have an active "to do" list at this time. Check in the Nebraska section of the Waze forums to discuss creating one.

The table below identifies the editors also designated as Area Managers or higher who are editing in Nebraska. If you have any questions, please consider contacting them directly as needed. If you are an Area Manager that covers Nebraska, or a USA Country Manager that does a lot of work in Nebraska, please add yourself to this list (alphabetical by username) in the correct rank section.

The editor who also serves as the Regional Coordinator for Nebraska is automatically listed at the top of the table. That editor may not be highly active in this state and therefore may not be listed separately in the table.